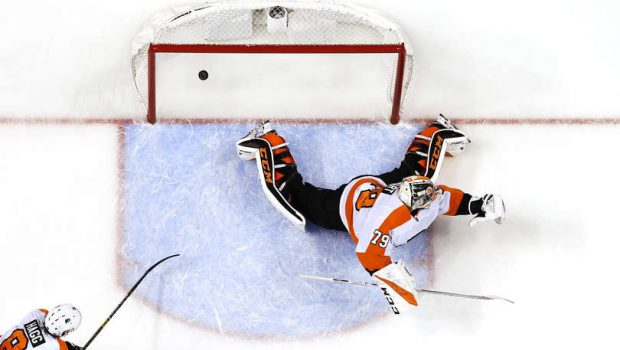 FLYERS CHOKE IT AWAY AGAIN IN FLORIDA, 2-1!

Jonathan Huberdeau scored with 1:06 left (above) and Florida came back in the final period for a 2-1 win over the Flyers.

Florida mounted the winning rush when Keith Yandle sent a long stretch-pass to Evgenii Dadonov along the boards near the Florida offensive zone.

Dadonov slid a pass back to Aleksander Barkov, who found Huberdeau skating in cross-ice on the back door for his 10th goal.

Flyers interim head coach Scott Gordon said it was a risky play by Florida, who improved to 5-0-3 in the second game of back-to-back contests.

“It started off, they got possession and went into a set breakout. When that happens, you have to get into your position. They just took off. And as soon as they took off, they fired it up the boards. … It’s a bit of a hope play by them,” Gordon said.

Down 1-0, Florida’s second-ranked power play finally put the Panthers on the board in the third period. Huberdeau slid a pass through the slot to Mike Hoffman, who buried his team-leading 18th goal at 13:16 to tie it at 1.

In Florida’s 5-3 home loss on Friday to Montreal, the Panthers top

Philly killed 40 seconds of a 5-on-3 power play and the remaining 1:20 with the Panthers on the man advantage in the middle portion of the period.

Carter Hart stood strong in the second period as the Panthers put nine shots on goal, with a few being good scoring chances. He stuffed Denis Malgin in the first minute after a slick drop-pass by defenseman Mike Matheson as he went behind the Flyers’ goal.

The 20-year-old goalie denied Dadonov twice in a minute — once point-blank from the middle of the slot at 14:03, the other when the Russian forward circled behind Hart’s goal and lifted a high shot from in close that Hart held.