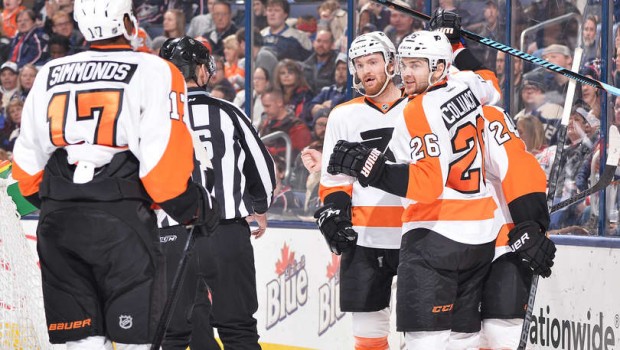 “It’s pretty embarrassing,” Flyers center Sean Couturier (smiling in photo above) said. “We’re in the [Stanley Cup Playoff] hunt. You can’t have an effort like that. You’re not going to go far if we play like that. If we want to, we can be one of the best teams in the league. There’s something wrong losing these games the way we’re losing.”

The Flyers may yet make the playoffs this season, and if they do Comcast SportsNet hockey analyst/glove puppet Al Morganti thinks Craig Berube should be NHL coach of the year!

But the orange and black completely choked a game away last night in Columbus after being up two goals with five minutes to go in the game, and as a result they are seven points behind the awful Boston Bruins instead of six.

Former Flyer Scott Hartnell, in his 1,001st NHL game, assisted on the late tying goal by Cam Atkinson, and Artem Anisimov scored with 2:43 remaining in overtime for a 4-3 win against the Flyers.

“We made two mistakes,” Flyers coach Craig Berube said. “We left the net on the one goal. No reason for it. Bad line change on the other goal.”

Columbus got its first points this season when trailing after two periods (1-20-0).

In overtime, Nick Foligno sent the puck from the right corner to the blueline to James Wisniewski, whose shot was saved by Flyers goalie Ray Emery. Anisimov was at the crease to gather the rebound on his backhand before going to the forehand for his third goal of the season.

“I feel like it’s a weight off my shoulders,” he said. “As you know, I haven’t scored for a lot of games.”

“We were doing a lot of good things throughout the game,” Richards said. “We were playing with some confidence and stuck with it.”

“It’s pretty embarrassing,” Flyers center Sean Couturier said. “We’re in the [Stanley Cup Playoff] hunt. You can’t have an effort like that. You’re not going to go far if we play like that.

“If we want to, we can be one of the best teams in the League. There’s something wrong losing these games the way we’re losing.”

Columbus appeared headed for a second straight defeat before Boll tipped a centering pass from Corey Tropp after linemate Mark Letestu worked the puck free along the boards.

“Both guys did a great job on the goal and Tropp made a great pass,” Boll said. “We knew if we kept going we were going to start putting them in.

“It feels good to contribute at that point in the game. We needed a goal. Everyone on the ice touched the puck and made it happen. It feels nice to get on the board and it feels even better to get the win.”

Atkinson tied the game when Brandon Dubinsky’s shot was redirected toward Emery by Hartnell and Atkinson put in the rebound.

Hartnell has three goals and four assists in a five-game point streak, which included a goal Monday in his 1,000th game, a 4-3 loss to the Los Angeles Kings.

He was recognized prior to this game for his milestone. He played 517 games in seven seasons with Philadelphia before being traded to Columbus in June.

“It was awesome,” he said of the ceremony that included a video tribute and gifts from the NHL and Blue Jackets. “My mom and dad were on the ice. To play a thousand games and give thanks to them, words can’t describe how you feel.”

Hartnell was even happier the Blue Jackets won.

“We were skating. We were physical. Our turnovers were four or five in the game,” he said. “We played hard, fast, Blue Jackets hockey. Everyone contributed. Everyone had fun.”