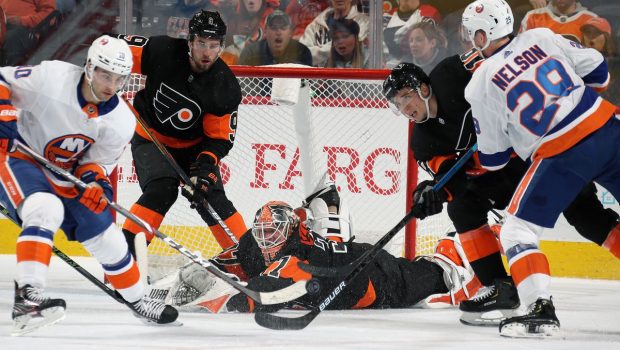 FLYERS CHOKE AWAY 3-0 LEAD AND LOSE TO ISLES IN SHOOTOUT!

Anthony Beauvillier scored twice during New York’s three-goal, third-period rally, and the Islanders beat the Flyers 4-3 in a shootout.

Beauvillier and Mathew Barzal combined to erase a 3-0 deficit in the final 13 minutes of regulation, and Jordan Eberle and Barzal scored in the shootout.

After getting stymied by goaltender Brian Elliott for most of the evening, the Islanders broke through when Beauvillier took advantage of the Flyers’ sloppy line change before beating Elliott.

Barzal slammed one past Elliott on a power play with 6:22 left, and Beauvillier got his fourth goal in two games with 2:04 left.

Thomas Greiss stopped 28 shots and turned away Sean Couturier and Claude Giroux in the shootout to earn his seventh straight win.

The Flyers fell flat in the third period. Barzal’s goal came as a result of a bench minor for too many men on the ice. The Islanders were able to take aim at Elliott through the back half of the game as the Flyers struggled to get its defensemen in the right spot.

”You have to close out games,” Elliott said. ”The little plays – getting the puck out when you can, allowing guys to change, just keeping fresh bodies on the ice and not getting stuck out there. We spent a little too much time doing that. We will look at it and I’m sure we will find some other things, too.”

Couturier got the game’s first goal on a wrist shot that deflected off defenseman Nick Leddy’s stick in the first period.

Ivan Provorov scored on a power play with 24 seconds left in the first. He one-timed Couturier’s feed for his fourth goal of the season.

Oskar Lindblom added his ninth of the season midway through the second period.