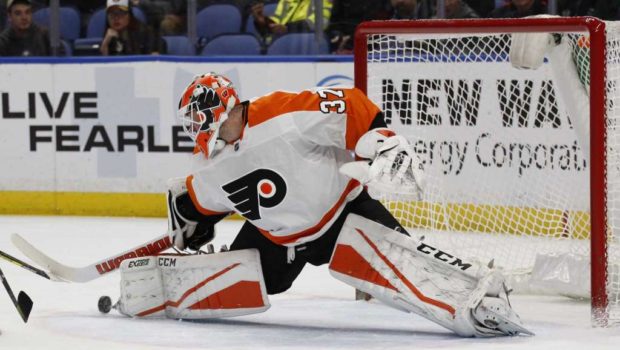 IF FLYERS HAVE ANY CHANCE AGAINST PENS, BRIAN ELLIOTT IS THE KEY!

Okay, let’s get real before the Flyers and Pens get nasty tonight in Pitt for the start of the Stanley Cup playoffs:

The Pens swept and dominated the season series. They won all four games and scored five goals in each, including a 52-shot barrage against the Flyers on Nov. 27.

The most recent game, March 25, was a 5-4 Penguins win in OT which provided plenty of potential insights into the upcoming series.

The Penguins’ forwards are deeper and more talented than the Flyers’. The Penguins will be happy to let this be a series decided by top-six players. The Flyers are no longer the physical crew which drew the Penguins into a wild affair in 2012. Not even close.

The Flyers have been reconstructed by GM Ron Hextall to incorporate speed, scoring, and talent. They will likely roll with at least two rookies in their top two lines: Second overall pick Nolan Patrick and Swedish sensation Oskar Lindblom. The pair has talent but it will be their first run in the playoffs. Especially against a veteran team like the Penguins, the Flyers may be outmatched.

This season, the dynamic changed. In the most recent matchup, Crosby had more than 50 percent of the shots and notched the only goal.

For the Flyers to win, Giroux will have to bold the scoring sheet often. The same is not true of Crosby.

The 2018 Stanley Cup could be decided by the Evgeni Malkin line. Patrick will anchor the Flyers’ second line. On March 25, Hakstol quickly altered the matchups to get Patrick away from Malkin but also to slow the Penguins third line, which that night was Conor Sheary,Derick Brassard, and Phil Kessel.

The Malkin line has been extraordinary in 2018. The right wing has changed, from Kessel to Patric Hornqvist, Bryan Rust and back to Hornqvist. Carl Hagelin has been the puck retrieval winger and applied the aggressive forecheck. The line has created turnovers, offensive pressure, and goals.

It’s hard to imagine the Flyers holding this line in check.

The Flyers have a dynamic defense corps which are able to play the puck and join the rush. On March 25, the Flyers used the defense to the fullest.

Branding Manning and Travis Sanheim both lit the lamp by coming late on the play. The Penguins’ forwards didn’t hold their positions and didn’t cover the defensemen who had open looks at Matt Murrayfrom the high slot and circle.

The Penguins’ defensive-zone coverage and attention to detail have been a problem this season. The Flyers took full advantage but the Penguins have turned a corner over the past couple weeks, in preparation for the second season.

The Penguins have activated their defense in recent weeks. Justin Schultz has been especially good at sealing the wall to keep the play alive. Unlike earlier in the season, the Penguins forwards have covered their defensemen, which has bred trust and more pinches.

The Penguins have played forward with aggressive forechecks and active defensemen. The series will be a battle of offensive possession. If the Penguins’ forwards pay attention to detail, they will be able to mitigate the Flyers’ trailing-defenseman strategy.

The series’ great wild card will be goaltending.

Will Murray show his playoff form which earned him two Stanley Cups before his rookie status expired? Will Brian Elliott be the goaltender who seized the net from Jake Allen in St. Louis in the 2015-16 playoffs? Or will Elliott be the inconsistent, blitzed goalie from Calgary?

How soon could Hakstol go to Petr Mrazek?