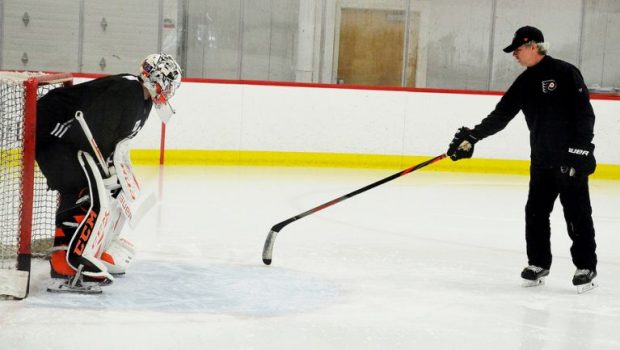 FLYERS CARTER HART ON THE ICE, THOUGH HE DIDN’T PRACTICE!

Goalie Carter Hart didn’t practice yesterday, two days after scaring everyone by bolting with a bad back.

But he took the ice on the opposite rink at Virtua Center Flyers Skate Zone and faced some shots following the scrimmage.

The Flyers have one more on-ice practice today before leaving Sunday for the Eastern Conference’s hub city Toronto.

Goaltending coach Kim Dillabaugh, director of sports medicine Jim McCrossin and head coach Alain Vigneault decided it was best for Hart to try side work before hopping into a lively scrimmage.

Per Vigneault, all went well.

“The reason we didn’t put him in practice today was because it was a scrimmage and he hadn’t skated for the last two days, so we felt that it was smarter – in talking with Kim and Jim – to put him out on his own, let him take a good number of shots and see how he feels. He came out and he feels real good, so everything should be good to go [Friday].

The Flyers are off the ice today and scheduled to practice at 10:30 a.m. Saturday.

It was just a year after the Flyers were forced to use an NHL record eight goaltenders in a nightmarish 2018-19 season.

The Flyers like their chances with Hart and Elliott in the NHL’s return-to-play 24-team tournament.