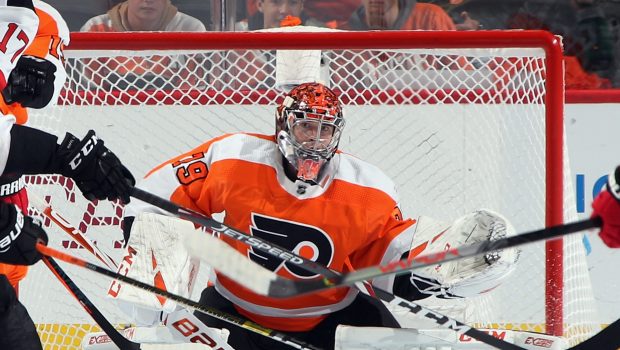 Says an anonymous survey by The Athletic:

There wasn’t much debate from the panel over whether Hart is trending up, even if he saw a slight dip in his save percentage. The bigger debate centered on what exactly he is right now. Or what he’ll be this season.

In the minds of some panelists, he’s already there. He received three votes for Tier 1 from the panel — people who already think he’s a top-tier goalie. But there are still those who want more time to assess.

Added a head coach: “I like Carter. I like him. It’s a little bit … wait and see. I think he’s going to be really good.”

So what does he already do well at age 22? Other than being able to handle the pressure of playing for a franchise where goalies have historically struggled, Hart’s style should lend itself to consistency as he matures.

“He is one of the most efficient goalies in the league, the way he tracks, the way he moves. I just think, physically, he’s as skilled as you can get,” said a goalie coach. “There’s going to be part of it between the ears that’s going to be the determining factor of how consistent he’ll be. He can shut you down, and it’s fairly simple for him. He’s a modern guy who has grown up in a way that is more efficient than guys (who came before him).”

A few panelists brought up Hart’s struggles on the road as something that needs to be improved moving forward. Last season, Hart was 20-3-2 with a .943 save percentage at home. He was 4-10-1 with a .857 save percentage on the road.

“He was horrendous on the road,” said a panelist. “He cannot play on the road right now. He’s got to figure that part out. He’s very well versed on the psychological aspect of hockey and life. He’s a man of routine. He gets himself into a pregame rhythm. I just don’t know if he’s found out how to do that at the NHL level (on the road).”