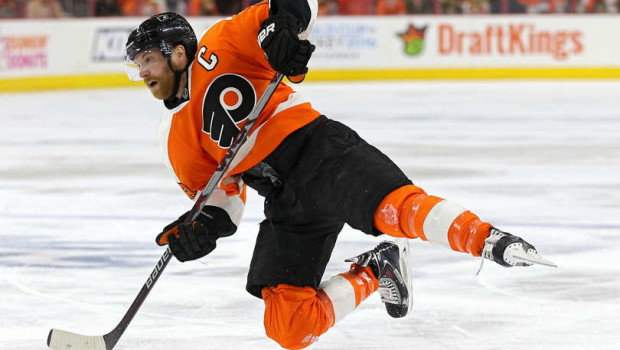 Flyers’ captain Claude Giroux is finally healthy, and not a moment too soon!

He had offseason abdomen and hip surgeries that took way longer to recover than he thought.

“It’s been a lot of work,” he said recently. “I think me and (Shayne Gostisbehere, who had the same surgeries on the same day) are kind of in the same boat. We’d been rehabbing together. This summer was my first summer not working out. I’m in really good hands with the medical staff here in Philly. We’re just looking to get better.”

Giroux had 12 goals and 33 assists in 63 games heading into Saturday’s game against the Washington Capitals, about a third less production in terms of points per game than two seasons ago.

“Maybe I wasn’t ready to play in that World Cup, but I did the best I could,” Giroux said. “Playing with all those elite players, it’s only going to help me.”

Gostisbehere played in the World Cup also, for team North America, and while he admits his skating is better now than he did in October, he stopped short of saying that it was a byproduct of the surgery.

“If anything, I think it helped me,” the defenseman said. “I’m not in pain anymore, but it comes with the game, comes with the territory. Got to learn to battle through it.”

As the Flyers make a run for the playoffs, Giroux should be their biggest weapon. Problem is the rest of the NHL knows it. Especially on the road, he doesn’t get the favorable matchups he usually gets at Wells Fargo Center when the Flyers have the last line change.

“Bluntly, the last month, month and a half has been tough for our team,” coach Dave Hakstol said. “He’s the guy who’s at the front of the line with the spotlight on him.

“I think he and his linemates have done a good job. That has to continue. The next challenge for him is on the road where we don’t control the matchups for him for who’s on the other side. You’ve got to find a way to beat that line.”

That looks like it has a good shot at happening with the snarl around. Recently, Giroux has had the strength to be outmuscling bigger opponents to pucks and springing teammates with an outlet pass all in what looks like one fluid motion.

Voracek recently said he thinks Giroux is “about to break through.” Add Voracek as part of the group that thinks the Flyers will go as far as Giroux takes them.

“I know him for a long time,” Voracek said. “I’ve played with him on the same line for four years combined. He’s a gamechanger. Everybody knows that. Maybe the puck didn’t go in for him as well as he would like to, or the points didn’t rack up the same way as in the past. But like I said, he’s the guy (you want) on the ice.”