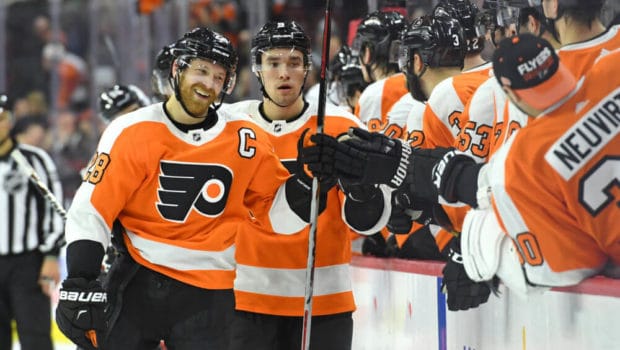 FLYERS CAPTAIN CLAUDE IS BACK ON TOP WITH ALL-STAR SELECTION!

The National Hockey League yesterday validated what Flyers fans have known for some time:

Captain Claude Giroux is back among the league’s elite!

“It’s a pretty good feeling. I think a lot of guys on the team are deserving of going, too,” Giroux told NHL.com. “The NHL always does a good job of making this a great event for the fans and players and it’s always a good time.”

This is the fifth time he has been named to the NHL All-Star Game, last appearing in the 2016 festivities in Nashville. He has also played in the 2015 (Columbus), 2012 (Ottawa) and 2011 (Carolina) All-Star weekends.

“There are a lot of reasons why,” Giroux said about his improvement. “Things are just going better, the team is playing better. I think going on the wing and playing with Coots (Sean Couturier) and not being able to play defensively as much has helped. Coots is a really responsible player. We don’t spend a lot of time in the defensive zone because he’s making a lot of smart plays and we have a good chemistry going. The last few games we have been playing very well and it’s exciting to be a part of it.”

Giroux becomes the first Flyer since John LeClair (5 times) and Eric Lindros (6 times) to be named to an All-Star Game roster for five ore more times. Bob Clarke owns the Flyers record for being named to 10 mid-season NHL All-Star teams and appearing in nine of those games.