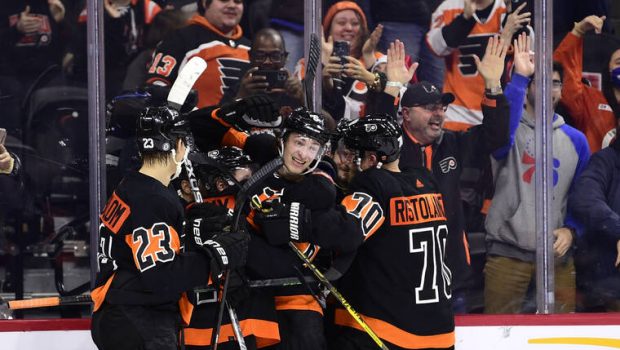 FLYERS-CAPS TONIGHT, AND THEN 8 DAYS OF NOTHING!

The Flyers are looking for their fifth win in six games tonight against the Caps at the Wells.

Because of the NHL decision to cancel games after tonight because of COVID, the next Flyers game is Dec. 29 against the Kraken.,

Philly could be short-handed as Morgan Frost and Max Willman missed Saturday’s game in the league’s health and safety protocols. Goaltender Carter Hart has been out with an unspecified illness.

The status of all three players remains unclear for this matchup against the Capitals.

“Good teams rise up to the challenges — that’s what it is,” Flyers interim head coach Mike Yeo said. “You can point to any sport, you can look at our sport, there are teams out there that just when you sort of think their backs are against the wall or they’re in a tough position, they find a way to come out and get the job done.

“So that’s what we want to become,” he added.

“You try to prepare yourself like any normal game,” Sean Couturier said. “We’re playing, and I don’t prepare myself any differently. … Until I’m told otherwise.”

The Capitals also have been dealing with absences because of COVID-19.

For the most part, they’ve been playing well. They held a 2-0 lead but ultimately fell 3-2 to the Los Angeles Kings on Sunday.

“There wasn’t a lot that we gave up,” Capitals coach Peter Laviolette said. “And it’s a lousy feeling when you lose a game where you feel like you’re doing the right things and you’re in control. And we didn’t get it done, and that’s frustrating about the game.”

Washington played without several key players in the health and safety protocols, such as Evgeny Kuznetsov, Nicklas Backstrom, T.J. Oshie and Michael Sgarbossa.

“It is what it is, and we have to move forward,” Laviolette said.

“It’s never-ending here and it’s tough, but guys are doing a great job coming in and helping us out,” Justin Schultz added. “Got to find a way to keep plugging along here.”

The Capitals have struggled on the power play, however, going 1-for-21 in the past nine games. They went 0-for-6 against the Kings and appeared to be out of sync.

Washington did receive an unexpected boost from Joe Snively, the first player from Virginia to compete for the Capitals. Snively was called up from Hershey when Oshie was added to the virus list.

“He’s worked hard,” Laviolette said. “He put himself in a position to have his name called.”