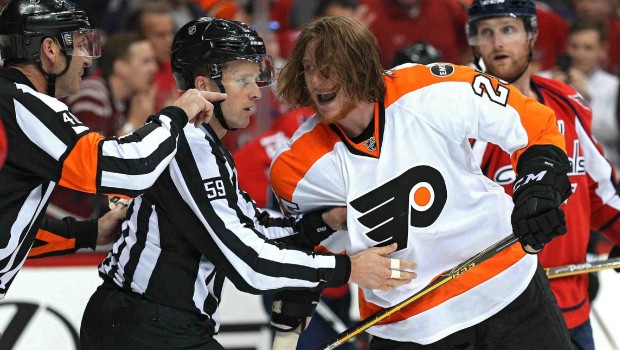 FLYERS-CAPS GAME 1 A HEAVYWEIGHT FIGHT: CAN THEY KEEP IT UP?

Can the Flyers and Caps keep up the physical play that characterized last night’s game 1?

Game 1 between the Capitals and Flyers featured 56 hits, 44 blocked shots, one and a key player knocked out of the game.

It also featured a 19-save shutout by Braden Holtby as the Capitals emerged with a 2-0 win to grab early control of their first-round series against the Flyers.

“This is what we played 82 games for, to get to this position,” Capitals right wing Justin Williams said. “We earned home ice and we want to try and keep it.”

The Capitals got a power-play goal from defenseman John Carlson after a weird delay-of-game penalty to Brandon Manning in the second period and Jay Beagle turned a Shayne Gostisbehere giveaway into his first goal of the playoffs with 3:24 remaining in the third to secure home ice.

According to Elias, the team that wins Game 1 of a playoff series goes on to win the series 68.6 percent of the time. But can either team survive seven games of this?

“It’s going to be physical,” Capitals defenseman Matt Niskanen said. “I thought there was good speed tonight on our side. I thought we did a good job of negating their speed and penned them in their own zone a few times.”

The Caps outhit the Flyers 29-27, led by Alex Ovechkin, Brooks Orpik and Dmitry Orlov, all with four hits. More importantly, the Caps kept their cool in the third period, when the Flyers took nine penalties to the Caps’ five.

“Historically, that’s part of the Flyers,” Niskanen said. “They try to do things to change the momentum and I thought we stayed fairly disciplined tonight. We have enough leadership in here. Guys have been around and we know the tricks. If the game’s not going well they’re going to do something to change the momentum.”

The biggest and perhaps most consequential hit of the game came midway through the second period when Ovechkin rode Sean Couturier into the boards. Couturier, who centers the Flyers’ second line and vowed to get in the grill of Holtby this series, left the ice holding his left shoulder in place. He did not return and will re-evaluated on Friday.