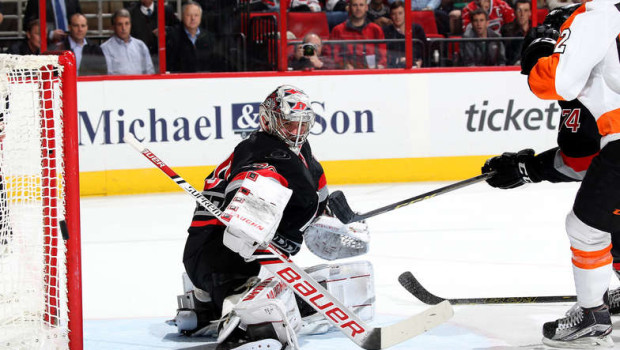 The Flyers’ push toward the NHL playoffs came up against an immovable force last night in Carolina.

Cam Ward made 36 saves and is 7-1-4 in his past 12 starts for the Hurricanes (28-23-10) as the Flyers lost 3-1 to remain five points behind Pittsburgh in the race for the last wild card spot in the Eastern conference.

The Flyers (26-22-11) were strong on the forecheck throughout the game and outshot the Hurricanes 37-18.

Scott Laughton scored his fifth goal to give Philly a 1-0 lead at 17:45 of the first period. After taking a pass from Matt Read, Laughton pushed a shot along the ice that fooled Ward and slipped between his pads. Radko Gudas got the second assist.

“I had a little bit of a laugh at it,” Ward said. “The guys that were driving the net, the snow sprayed and got me right in eye. I lost my vision. You’re kind of thinking, ‘C’mon!'”

Carolina tied it in the second period after an errant clearing attempt by Michal Neuvirth. The Flyers goaltender made a blind pass from behind the goal line into the right faceoff circle, directly onto the stick of Joakim Nordstrom, who sent a wrist shot into an empty net at 8:09.

“We didn’t have the same momentum, legs and execution we normally do,” Eric Staal said. “That goal kind of evened the tide and gave us some life.”

The Hurricanes took advantage of a favorable bounce to take a 2-1 lead with 1:34 left in the second period. Brett Pesce sent a pass around the boards, but the puck hit the referee and caromed into the low slot, where Jordan Staal spun and scored his 16th goal, his most in his four seasons in Carolina.
Jordan has at least one point in 16 of his past 21 games.

“I’ve been trying to contribute as best I can in all scenarios for our team,” he said. “For them to start rolling in, it’s always a nice feeling to be on that side of it.”

Ward was sharp in the second, stopping Jakub Voracek and Nick Cousins on short breakaways less than a minute apart. Moments later, Ward pushed across the crease to deny Read’s shot on a 2-on-1.

“It’s the beauty of the position,” Ward said. “Maybe when your team is not playing as well as they would hope, it opens the door to step up your game and try to change the momentum.”

Each team had two power plays through the second period but failed to score. Philadelphia held a 28-15 advantage in shots.

Eric Staal scored an insurance goal at 14:11 of the third period when he knocked in the rebound of a Jay McClement shot just under the crossbar.

The Flyers had nine shots in the third period.

“Their goaltender was the difference,” Philly coach Dave Hakstol said. “You walk away from this one and we didn’t get the two points, and that’s all that really matters this time of year. But we did play a [heck] of a hockey game, so we’ve got to carry that play and that mentality into a home game in two days.”

The Flyers, who host the Minnesota Wild tomorrow, went 2-2-1 on a five-game road trip. They played the final two without captain Claude Giroux, who sustained an upper-body injury in a 3-2 shootout loss to the Montreal Canadiens on Friday.

The Hurricanes trail the Pittsburgh Penguins by two points for the second wild card into the Stanley Cup Playoffs from the Eastern Conference. After a slow start, they have not lost consecutive games in regulation since they lost three straight Nov. 27-Dec. 3.

Ward has played a key role in Carolina’s resurgence.

“He stole this game for us,” Peters said. “Big saves, 2-on-1s, breakaways, all kinds of stuff going on. He allowed us to stay in the game and get our footing a little bit, not that we ever got it 100 percent, but enough to find a way.”