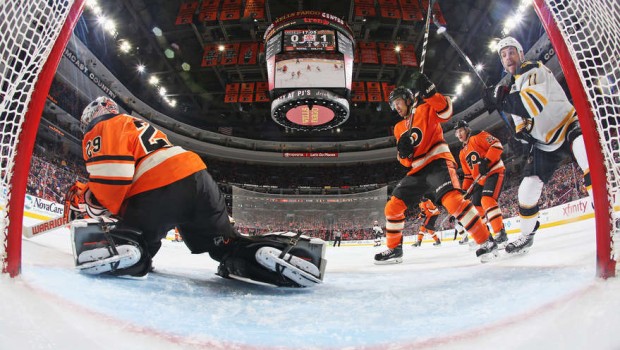 FLYERS CAN PULL WITHIN 2 PTS. OF BRUINS WITH WIN IN BOSTON TODAY

The magical mystery tour that the Flyers’ season has become arrives in Boston today, and the Flyers can do the Bruins a lot of damage with a win.

The Bruins (31-22-10) enter the final five weeks of the regular season clinging to a two-point lead over Florida for the East’s final wild-card spot.

The Flyers have dropped the past five meetings but are excited by the chance to gain ground on the Bruins.

“If we can grab those two points from them, that’s two more points that they can’t get, so it’s in our favor,” winger Wayne Simmonds said. “We have to be really prepared for that game and start right from the drop of the puck.”

“They are fun games to be a part of, but this is a time of year where playing hockey is extra fun just because there is so much on the line,” goaltender Steve Mason said. “Especially for us right now when every game is a must-win.”

Both clubs are 2-0-1 in their last three games, with the losses coming to Calgary. Philly followed its overtime defeat with a 3-1 win over St. Louis on Thursday, the same night Boston fell to the Flames 4-3 in a shootout.

The Bruins have lost all seven of their shootouts since the beginning of December. They’ve converted a league-worst 13.0 percent of their shots in tiebreakers (6 of 46), scoring once in the last 26 attempts.

Mason left the last meeting with a knee injury and eventually needed surgery, but he’s been solid in four games since returning with a 1.96 GAA. He is 7-1-2 with a 1.45 GAA in his last 12, but only two of those games came away from home.

He’s won only once in 15 road starts, and Philly has one of the league’s worst road records since Christmas at 3-8-3.

The Flyers have killed a dreadful 70.4 percent of opponents’ power plays on the road. Boston is also struggling in that department, with its last eight opponents going 8 for 24.