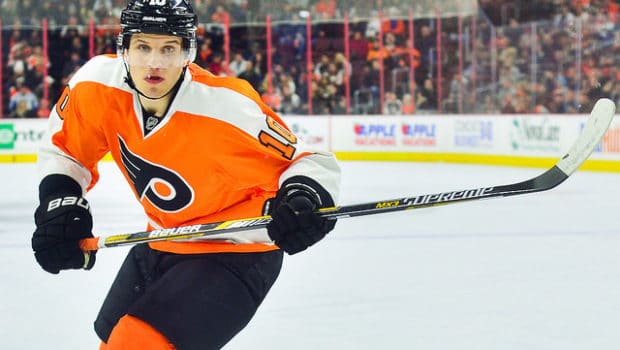 The Flyers take their magical mystery tour in pursuit of an Eastern Conference wild card spot to Toronto tonight.

A win by the Flyers in regulation will tie them with the Maple Leafs at 72 points and depending on other results bring them to within one point of a postseason berth.

“Obviously, it’s a long season but I think this is what players live for, down the homestretch here where you have 20-15 games left,” Flyers center Brayden Schenn (above) said. “These are the fun and important games that guys want to be a part of and for us, it’s a cliche answer, but they’re playoff games.”

The Maple Leafs, meanwhile, hope they have turned things around after holding on for a 3-2 victory over the Detroit Red Wings on Tuesday to end a five-game losing streak.

“I think every point you can get at this point in the season is critical,” said Maple Leafs left winger James van Riemsdyk, who ended a 14-game goalless drought with his 20th of the season Tuesday. “We know where we’re at in the standings, we’re fighting for our lives. We showed some good desperation off the start (Tuesday) and played well, I thought, for most of the game.”

This will be the third and final meeting this season after the clubs split the first two games.

“Every game is a playoff game and these two points are very important for us,” Flyers defenseman Radko Gudas said. “The playoff push is on and we need every point we can get.”

The Maple Leafs have had problems maintaining third-period leads. They blew a two-goal lead in the third period seven times this season. They led 3-0 at one stage against the Red Wings on Tuesday, took a 3-1 lead into the third and staggered to the finish without allowing the tying goal.

Maple Leafs coach Mike Babcock said that he has no answers to what he can tell his young team to help them hold leads.

“Obviously, I don’t because you’re watching just like me,” he said. “I’ve got all these great things I say but none of them seem to work. The reality is we’re in a really good spot. You’re up 3-2 (Tuesday), you’re at home with six minutes or eight minutes left or whatever it is. Play the game.

“When you’re loose and driving, you’re flying and on top of the other team and you look fast and you’re playing right. Then when you’re tight you look slow. That’s just the reality of being in the league and learning how to win and expecting to win every night and understanding what you’ve got to do to win.”

The Flyers said that their experience of making a successful charge into a playoff spot last season will help them this time,

“To be able to draw back on confidence, knowing that we’ve been here before and been successful with it, it’s huge,” goaltender Steve Mason said. “The way the season is going to go for the rest of the year, there’s going to be ebbs and flows, ups and downs so it’s just a matter of staying even-keeled. After a big win, you have to realize there’s going to be another game either the next or the following day, so its just a matter of making sure you come to the rink every day with the same mindset and that’s to be the best team out there.”

Mason started the past four games in which the team is 3-0-1. In those games, he has a shutout, a 1.45 goals-against average and a .945 save percentage.