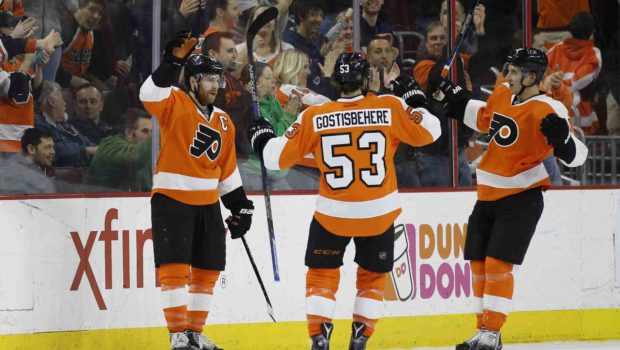 FLYERS CAN BUILD ON SABRES WIN AGAINST WOEFUL COYOTES

The Flyers host the Arizona Coyotes tonight at the Wells with a chance to build on their win over the Buffalo Sabres Tuesday night.

The Coyotes gave their home fans a thrill with a season-opening victory over the Flyers before packing their bags to begin a six-game road trip.

“You’re learning about your team, but there’s lessons that are preventable – and that’s the thing that’s bothersome right now,” coach Dave Tippett told the Arizona Republic of the Coyotes, who are off the worst start in franchise history.

The Flyers have been known for its slow starts in recent years, but came on with a late flourish on Tuesday as it erased a three-goal deficit in the third period to Buffalo before posting a 4-3 victory in a shootout.

Captain Claude Giroux, who scored in the bonus format, notched his league-leading eighth assist to extend his point streak to six games. Fighting back from multi-goal deficits is nothing new for the Flyers, who have at least evened the score in such situations on four occasions this season – including erasing Arizona’s two-goal lead before the Coyotes claimed a 4-3 overtime win on Oct. 15.

ABOUT THE COYOTES (1-5-0): Signed to a three-year, $10 million deal in the summer, Jamie McGinn set up Jordan Martinook’s goal and logged 14:22 of ice time in his season debut on Tuesday in a 5-3 setback to New Jersey. “I never like watching hockey games,” said McGinn, who was sidelined with an upper-body injury. “I want to be a part of it. I’m paid to play, and I want to be a big part of this team. First five games were pretty frustrating.” Struggling goaltender Louis Domingue (0-4-0, 5.03 goals-against average, .851 save percentage) could say the same thing about his first four this season heading into Thursday’s start versus Philadelphia, against which he yielded four goals in his lone career encounter.

ABOUT THE FLYERS (3-3-1): Travis Konecny may have sparked the comeback with his first NHL goal on Tuesday, but the 19-year-old told Philly.com that he’s fueled by his own fire.

“I’ve been told it’s not a nine-game tryout, but I’m still treating it that way,” said Konecny, who also has five assists and a plus-3 rating. “I have to work hard every single day and make sure I’m doing things properly. I’m not going to sit back and relax and think the spot’s mine.”

Mason is expected to get the nod tonight and owns a 5-9-1 mark against Arizona, versus which he yielded four goals on 35 shots on Oct. 15.