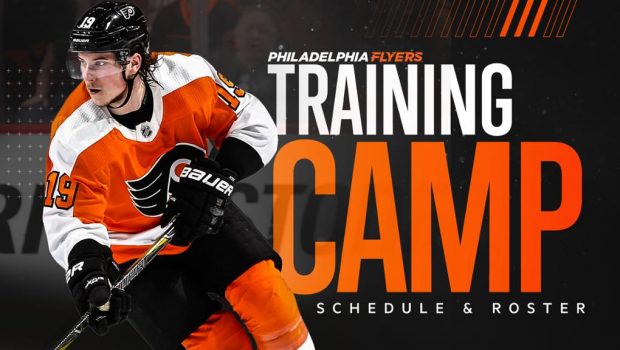 The Flyers open 2018 training camp next Friday, September 14 with 58 players taking part at the Skate Zone in Voorhees.

Camp will open with two days of on-ice sessions at 9:15 AM and 12:15 PM both Friday the 14th and Saturday the 15th, with the camp divided into two groups.

On Sunday, September 16, the Flyers will play their first of four preseason games in as many days when they visit the New York Islanders at 1 PM. The players not participating in that game will take part in a scrimmage at Flyers Skate Zone at 8:30 AM.

On September 17 the Flyers will host the Islanders at the Wells Fargo Center at 7 PM, and will visit them again on September 18. On those two days, the group playing in those evening’s games will take part in a morning skate at 10 AM in Voorhees, while the non-playing group will practice at noon.

The camp has an off-day on September 20 and will resume on Sept. 21 with ice times to be determined, and a game that night at PPL Center in Allentown vs. the Islanders at 7 PM.

Prior to the main camp, the Flyers will hold a three-day Rookie Camp at Flyers Skate Zone beginning Monday, September 10. The group will be on the ice at 11 AM on Sept. 10 and 11 and at 10 AM on September 12. That camp will culminate that day with a rookie game at the New York Islanders practice facility in East Meadow, NY at 6pm.

All on-ice sessions at the Skate Zone are free and open to the public, although the schedule is subject to change.