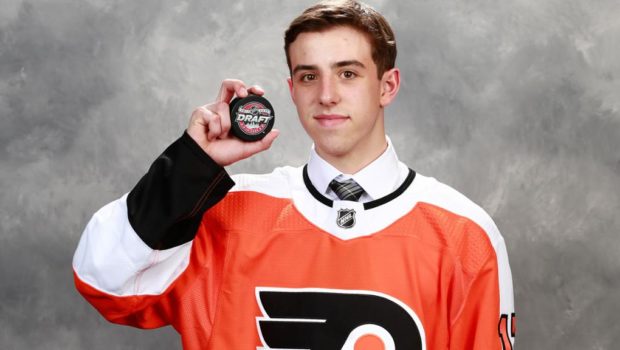 FLYERS CALL UP MARTIN FROST: CAN HE STOP 3RD-PERIOD BLEEDING?

Less than 48 hours after the Flyers dropped a tough-to-swallow decision to the Islanders on Saturday night, the AHL-to-NHL transactions sheet lit up again.

This time, it was Morgan Frost, who scored 109 points last season in junior hockey and 12 points in 16 games thus far with the Lehigh Valley Phantoms.

Fans had already started to wonder what it might take to force a recall of the talented 20-year-old forward, especially given that there seemed to be a spot available for him in the lineup — a top-nine center role, since Nolan Patrick remains stuck in limbo with his migraine disorder.

Well, apparently, it took similar circumstances to when Joel Farabee was called up on Oct. 20, and when Philippe Myers returned to the big club on Halloween — an extended losing streak that inspired an extended conversation among the Flyers’ brain trust on what could be done to improve the team.

“Chuck and I talked for an hour yesterday morning, and an hour in the afternoon, about where we were, what he thought, what I saw. And putting our two minds together, we came up with this,” head coach Alain Vigneault said after practice yesterday.