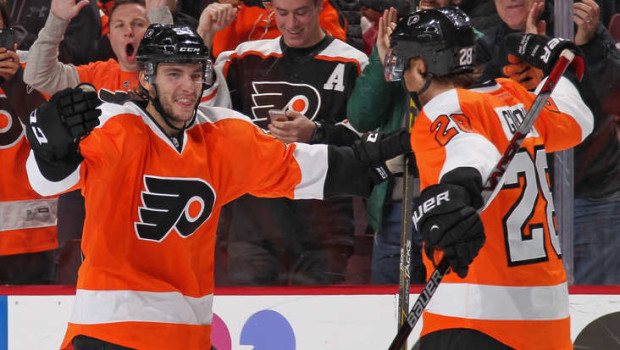 You’ve got to hand it to the Flyers.

They busted their ass last night against the Los Angeles Kings before losing in a shootout 3-2.

The Flyers took a 2-1 lead at 11:11 of the third period on Giroux’s goal off a give-and-go with Voracek, but the Kings kept pressing. They had 14 shots on goal in the third period, and with Quick pulled for an extra attacker, Los Angeles tied it.

Milan Lucic’s goal in the final minute of the third period tied it 2-2, and then center Anze Kopitar scored the only goal in the shootout for the Kings (12-6-0), who won their third straight game.

Goaltender Jonathan Quick made 36 saves through overtime, and then stopped the Flyers’ Sam Gagner, Giroux and Voracek in the shootout.

Jeff Carter lost a faceoff in the Flyers zone, but the Kings recovered the puck. Kopitar got it back to defenseman Jake Muzzin at the point, and Muzzin’s wrist shot hit off Kings forward Tyler Toffoli in front, bounced off the post and rolled through the crease to Lucic, who tapped it in with 55.7 seconds remaining.

“It was a good job by the guys keeping the puck in and executing up top and getting the shot through,” Lucic said. “Just able to find a loose puck sitting there. You’ve got to be lucky to be good right now, and right now, I’m getting that puck luck for sure.”

The goal was Lucic’s sixth of the season. He’s scored four in the past five games after he had two in the first 13.

Lucic said five months after the trade that sent him to the Kings from the Boston Bruins, he’s starting to get acclimated to his new surroundings.

Lucic’s contributions have been big, but there will need to be more if the Kings want to return to the Stanley Cup Playoffs.

“If he’s not comfortable now, I don’t know when he’s going to be,” Kopitar said. “He’s playing really well for us. He’s a force out there. That’s what we were looking to get from him. We’re very happy to have him. We’re going to need him to play like that.”

After Lucic tied the game, Kopitar went second for the Kings in the shootout and beat Mason with a high glove-side wrist shot.

“It’s a little pregame scouting and a little bit that we’ve known him from (his time with the Columbus Blue Jackets) too,” Kopitar said of Mason. “Everything comes into play. Just wanted to come down and really pick a corner, and then decided to go high glove, and it worked out for me.”

The Kings will play the second of their five-game road trip Friday against the Detroit Red Wings.

“Definitely helps to get that good feeling,” Los Angeles captain Dustin Brown said. “Continue that good feeling from winning a couple at home. Get on the road, especially the way this is set up for us. We play a game and now we get two days off. Having a win makes the start of the trip very good for us. Going forward we can try to use the momentum.”

Despite the loss, coach Dave Hakstol said he was happy with the Flyers’ effort.

“Our team played hard and we played well tonight,” he said. “… We’ll take the positives, push forward and have an effort that we can build off of going into Thursday night (against the San Jose Sharks).”

The Flyers thought they took the lead at 10:32 of the second period when Brayden Schenn got to the front of the net and knocked in the rebound of a Voracek backhand attempt. But video review determined that Schenn used a distinct kicking motion to knock in the puck.

Philadelphia had other chances to go ahead in the second but went 0-for-3 in the period on the power play.

The teams exchanged power-play goals in the first period.

McBain’s goal at 15:06 went off the stick of Flyers defenseman Luke Schenn and past Mason. It was his first goal since Feb. 5.

Gostisbehere opened the scoring at 3:41. Giroux one-touched a Voracek pass to Gostisbehere above the circles, and the rookie defenseman one-timed a slap shot past Quick.