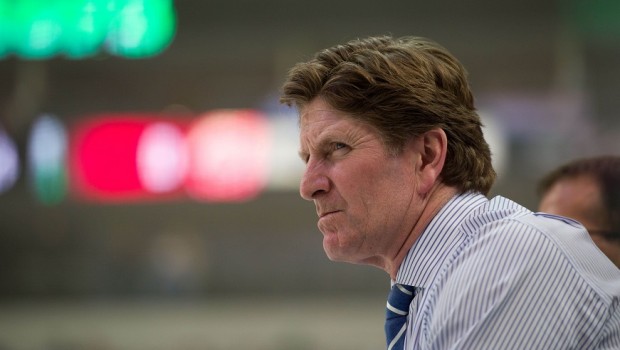 ARE FLYERS BLOWING A CHANCE TO EVEN TALK WITH MIKE BABCOCK?

The Mike Babcock bake-off began on Sunday in Buffalo, and Philly hockey fans want to know:

When is the hottest available coach coming to meet the Flyers?

The Detroit Red Wings coach referred questions to Sabres owner Terry Pegula when the two got out of an SUV at Buffalo-Niagara International Airport. Pegula said ”Hello,” before making a remark on how much rain had fallen. The two then walked away and boarded a private jet.

Babcock flew to Buffalo earlier in the day and spent the afternoon meeting with Pegula and general manager Tim Murray at the Sabres’ downtown arena. Babcock is still under contract with the Red Wings through June 30. The Red Wings are open to re-signing Babcock, but have granted him permission to interview with other teams.

The Sabres have a vacancy after Ted Nolan was fired last month.

Numerous teams are expected to court Babcock, who spent the past 10 seasons coaching in Detroit. The Toronto Maple Leafs,San Jose Sharks, Flyers and New Jersey Devils are also conducting coaching searches. The Edmonton Oilers haven’t determined whether to keep Todd Nelson. And there could be potential vacancies in both St. Louis and Boston.

The 52-year-old coached the Red Wings to a Stanley Cup title in 2008. His 458 regular-season wins in Detroit rank first among NHL coaches since the start of the 2005-06 season, according to STATS.

In granting Babcock permission to speak to other teams, Red Wings general manager Ken Holland said he hoped to have his coach make a decision by the end of the month.

Teams interested in interviewing Babcock have to agree to give up a third-round draft pick within the next three years as compensation to the Red Wings if they hire the coach.

A person familiar with discussions told the AP that the Sabres anticipate it’ll take Babcock more than a week to make a decision on his future. The person added, Babcock informed the Sabres that he still intends to travel to the World Hockey championships currently taking place in the Czech Republic. The tournament runs through May 17.

Babcock hasn’t ruled out staying Detroit, where he and his family enjoy living. However, he did express concern over the Red Wings’ aging roster after Detroit was eliminated in the first round of the playoffs by Tampa Bay.

In Buffalo, Babcock has a previous connection with Murray. The two worked in Anaheim together when Babcock served as the Ducks coach form 2002-04.

Babcock is expected to command a large salary, something that shouldn’t scare off the small-market Sabres.

Pegula has deep pockets. He and wife Kim also own the NFLBuffalo Bills, and made a big splash in January when they hired Rex Ryan to take over as coach.

2 thoughts on “ARE FLYERS BLOWING A CHANCE TO EVEN TALK WITH MIKE BABCOCK?”