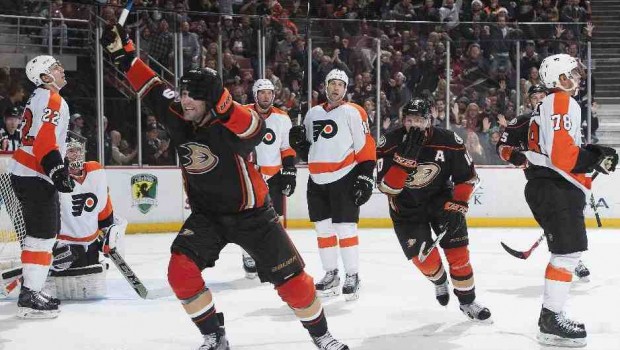 FLYERS MORE THAN WORSE, LOSE TO DUCKS 5-4 IN SHOOTOUT

There is an old expression in the NHL that dates to the days when Canadian players who spoke mostly French were asked by English-speaking reporters to comment on a terrible situation:

Put the Flyers in that category

When Wayne Simmonds beat the clock and tied the Anaheim Ducks with a clutch goal, the Flyers looked ready to end their lengthy road slump in an unlikely arena.

Jakob Silfverberg and Corey Perry scored in the shootout, and Anaheim rebounded from Simmonds’ late goal for a 5-4 victory over the spiraling Flyers on Wednesday night.

After the Ducks rallied from a 3-1 deficit and took the lead on Patrick Maroon’s power-play goal (photo above) against his former organization with 5:02 left, Devante Smith-Pelly fanned on the puck in front of an empty net before Simmonds scored his second goal with 2.6 seconds left in regulation.

”We were one second away from the full two points, but we battled hard tonight,” Perry said. ”There were a lot of guys who stepped up and made big plays for us.”

”It feels good getting that one, especially against those guys,” said Maroon, the former Flyers farmhand who was abruptly shipped to Anaheim in a 2010 trade. ”We’ve been going hard through it. We’ve been battling. That’s what brings us together as a team.”

But a few moments after Smith-Pelly couldn’t put a bouncing puck in an empty net, Simmonds followed his own shot and knocked it in, celebrating flat on his back.

”We’re playing better hockey, (and) we’re going to start picking up more points as things go along if we keep playing this way,” Simmonds said. ”Guys did a great job battling. The puck was kicked off to the side, and I was lucky enough for it to find my stick.”

Michael Raffl and R.J. Umberger also scored in the second period for Philly, which has lost six straight for the first time since October 2008.

”Moments like these, we’ve got to stick together as a team and find the positive things,” Umberger said. ”Tonight we kept battling against a desperate team in its building. We didn’t quit. This is going to be good for our confidence.”

Vinnie Lecavalier was a healthy scratch by the Flyers for the second straight game – and just the second time in his 16-season NHL career. The Stanley Cup champion and Richard Trophy winner with Tampa Bay is in a 12-game goal drought with just two assists since Nov. 1.

After a rare day of steady rain in Orange County, both teams seemed bogged down at the start, managing just four shots apiece in the somnolent first period.

Just 32 seconds after Umberger put the Flyers up 3-1 with his first goal in 18 games since Oct. 22, Getzlaf blistered a wrist shot past Mason. Vatanen then tied it in the final minute, sweeping in from behind with a backhand for his seventh goal.