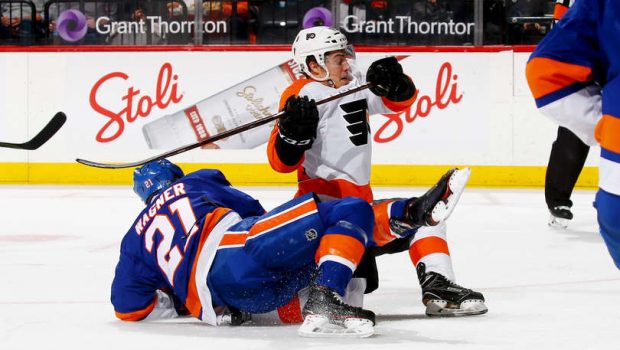 FLYERS BLOW GAME TO ISLES 5-4 AND PLAYOFF POSITION IS DICIER!

In the dying days of the endless NHL’s regular season, the Flyers seem to have found their level of incompetence.

The Flyers came back from three goals down in the third period to tie the score, but the Islanders got a big win over the playoff-chasing Flyers.

Matt Barzal had two goals and an assist, scoring the tiebreaking goal with 6½ minutes remaining, to lead the Islanders to a 5-4 win as Philly squandered a chance to move closer to clinching a playoff spot.

Nolan Patrick (above) had two goals and an assist, Claude Giroux added a goal and an assist, and Wayne Simmonds also scored. Petr Mrazek finished with 32 saves while falling to 6-6-3 in 15 games since being acquired from Detroit.

The Flyers lead Florida by four points for the last playoff spot in the Eastern Conference after New Jersey won to jump one point ahead of Philly for the first wild card. The Flyers and Devils each have two games remaining while the Panthers have three.

“Obviously it’s in the back of our minds, but if we want to get that playoff spot we got to do better than that,” Patrick said.

While the Flyers have beaten strong playoff-bound teams such as Winnipeg, Washington and Boston in recent weeks, they have lost to struggling teams such as Detroit, Dallas and the Islanders.

“Those teams are still good teams, not a lot of easy games anymore in this league,” Giroux said. “We didn’t earn that win tonight. We got make sure we come out strong next game.”

Patrick started the Flyers’ rally in the third as he deflected Shayne Gostisbehere’s point shot in at 4:07 to make it 4-2. Giroux’s assist on the play extended his points streak to eight games.The Islanders appeared to take control with a three-goal second period to take a 4-1 lead, but the Flyers — who were 5-0-3 in their previous eight — tied it with three goals in a nine-minute stretch of the third.

Patrick then got the Flyers to 4-3 as he knocked in a loose puck in front at 8:16 for his 13th and the rookie’s first multi-goal game.

Giroux tied it with 6:56 left as he beat Greiss top-shelf on the glove side for his 30th.

“We let them back in it and gave them some life,” Tavares said. “They started feeling a lot better about their game. … They’re playing for a lot and we’re just trying to finish strong so we’re just competing hard.”

Barzal then regained the lead for New York just 28 seconds later as he was streaking to the net, got a pass from Beauvillier and beat Mrazek for his 22nd.

The Islanders went ahead with three goals while outshooting the Flyers 17-5 in the second.

Beauvillier gave the Islanders a 2-1 lead as he skated across the slot and got his 20th at 3:43.

“It feels good to get to 20, but it’s not the spot we want to be in right now,” said Beauvillier, who scored for the fourth straight game and sixth time in his past seven.

Tavares put the Islanders up two with his second of the game with just under nine minutes left in the middle period, knocking the rebound of his initial shot over the falling Mrazek’s glove for his 36th.

Barzal made it 4-1 from the right circle with 3:33 left in the period.

Tavares got the Islanders on the scoreboard 7:15 into the game, just 10 seconds into a tripping penalty on the Flyers’ Sean Couturier.

Simmonds tied it with 53 seconds left in the opening period with his 24th.