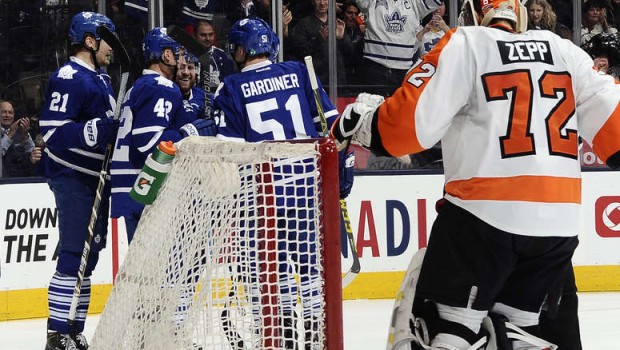 FLYERS OUTSHOOT LEAFS 49-17 BUT LOSE; 4 POINTS OUT OF PLAYOFFS

Two days ago we and the Flyers butt boy media were celebrating the team’s miraculous rise from 13 points to just four behind the Boston Bruins for the last playoff spot in the Eastern Conference.

Goaltender Jonathan Bernier made 47 saves, and the Toronto Maple Leafs defeated the Philadelphia Flyers 3-2 at Air Canada Centre on Thursday.

Prior to winning 4-3 against the Winnipeg Jets on Saturday, Bernier had lost 10 in a row.

“Even in my bad stretch I’m just trying to go shot by shot and not really focusing on the end result,” Bernier said. “Tonight we got fortunate I got a few bounces, good blocks, good stick, and a couple big saves, and we found a way to win.”

Toronto coach Peter Horachek praised Bernier’s performance, but added, “I expect him to play that way all the time. Where are we without him? Your goalie has got to be your best player and sometimes it just has to happen.”

The Flyers outshot the Maple Leafs 16-7 in the first period, but Toronto held a 1-0 lead on Phil Kessel’s 23rd goal of the season with 2:25 remaining. Kessel outraced Philly defenseman Nicklas Grossmann for a loose puck and then beat goaltender Rob Zepp (photo above) with a 20-foot snap shot.

Tyler Bozak made it 2-0 at 5:33 of the second period when he broke in alone and his shot went past Zepp, off the crossbar and in. Maple Leafs left wing James van Riemsdyk made a blue line to blue line pass to Bozak, who managed to sneak quietly behind the Flyers defense.

The goal came on Toronto’s eighth shot, one of two the Maple Leafs took in the second period. The Flyers responded by replacing Zepp with Steve Mason.

The Flyers led 31-9 in shots after two periods.

Phaneuf returned to the lineup after missing 12 games with a hand injury and scored a power-play goal 1:22 into the third period. The shot from the right point was his third goal of the season.

Philly captain Claude Giroux made it 3-1 at 11:10 of the third with a one-timer past Bernier. The goal, on a power play, was his 18th of the season.

Brayden Schenn scored his 12th of the season 3:17 later on a power play on a rebound to make it 3-2.

“Some nights you are going to play great and get no points and other nights you may play poorly and get points,” Schenn said. “It goes both ways. We can’t hang our heads because we have a big game coming up Saturday against the [New York Rangers].”

“There are no easy games in this league,” Schenn said. “You look at the Maple Leafs and they still have a lot of skilled players who can put the puck in the back of the net.”