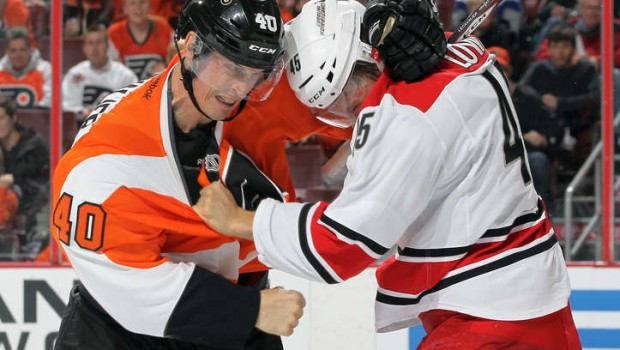 It’s very easy to make fun of the Flyers.

They are boring to watch.

They have a losing record when their owner, Ed Snider, implied before the season that they would be challenging for the Stanley Cup!

And they have no spirit.

But last night at the Wells, they invented another reason:

They lost to the God-awful Carolina Hurricanes 3-1, and they look terrible doing it.

Philly played the third period without forward Vincent Lecavalier, who sustained an upper-body injury. Lecavalier (photo above) did not play after getting into his second fight of the game with Carolina’s Keegan Lowe at 9:22 of the second period. Lecavalier, who had 14 penalty minutes in 56 games entering Thursday, was assessed 22 against Carolina.

The Flyers lost their 11th straight game (0-6-5) against teams that entered play Thursday out of a position in the Stanley Cup Playoffs; their last win against a non-playoff team was Feb. 15 against the Buffalo Sabres.

“I’m mystified for sure,” Flyers coach Craig Berube said. “The teams are all too good and they can beat you on any given night. You’ve got to prepare yourself and you’ve got to compete and play the same way. Skate and work against Pittsburgh and do the same against Carolina.

“It boils down to wanting to do it and intensity and just got to bring it. You may not have a hatred that you have against Pittsburgh but you do have to dig down and find the intensity to play.”

Bellemore found that intensity at both ends of the ice in the first period, scoring a goal and preventing one.

Midway through the period, Jordan Staal beat Philly’s Sean Couturier on a faceoff in the Carolina end, and Bellemore started the play going the other way. Staal carried the puck into the Philly end and dropped it for Eric Staal at the blue line. Bellemore drove to the net and got position on defenseman Nicklas Grossmann in front of the net and tipped Eric Staal’s low shot from the left point past Emery.

The Flyers finally found some offense in the final four minutes of the game, as they had seven shots on goal after having 21 in the first 56 minutes. Couturier’s goal with 3:41 remaining, which extended his point streak to five games, got the Flyers within 2-1. They continued to pressure, with Michael Raffl getting an open look from the slot with 1:41 left and thenClaude Giroux hit the post with 52 seconds remaining.

“I shot it and I couldn’t even see what was going on,” Giroux said. “I heard the post and it was a nice pass by [Jakub Voracek], but I don’t know. I was hoping for a little better bounce there.”

The Flyers won’t make the Stanley Cup Playoffs and pointed to one loss in particular which could have been the turning point of their season.

“Since we had that overtime loss to Boston [March 7 when they were 15 seconds from a win that would have gotten them two points from a playoff spot], it’s just been the story of the remaining part of the year,” Read said. “You win a couple of those games, you could be right back in the playoff hunt. We knew we had a chance. We were right there a month ago and it’s frustrating that we can’t find a way to win games when they’re needed.”

Jordan Staal closed the scoring with an empty-net goal with 38.4 seconds remaining.

The Hurricanes will miss the playoffs for the sixth straight season, but look to close out the season on a strong note.

“You don’t want to lose out the string,” Eric Staal said. “We’ll look forward to a good, competitive game at home here against Detroit, and go into the offseason looking forward to being better at start of next year.”