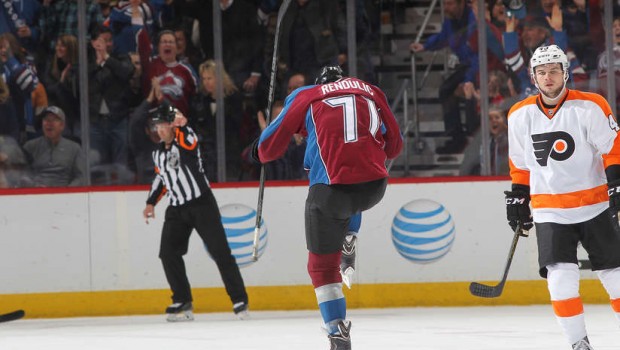 FLYERS BLOW ANOTHER POINT, LOSE 4-3 IN OT TO THE AVALANCHE

It was New Year’s eve in Denver and the Flyers looked like they were playing out the string in April.

That’s how typically they lost.

“We were going against a team with the same record, same position in the standings, and desperate too,” said Avalanche right wing Jarome Iginla, whose power-play goal tied the game 3-3 at 12:48 of the third period. “To pull that out, especially with a late tying goal, it’s a chance to use that as momentum going forward.”

Ryan O’Reilly won it with 19.9 seconds to go in overtime as the Flyers ended 2014 with a 4-3 loss about 10 minutes before midnight back in the East.

Iginla was in the lower part of the left circle when he accepted a pass from Nick Holden and put a one-timer by Mason’s glove.

“I think (Steve) Mason was a little committed to Holden shooting,” Iginla said. “He gave it over to me, and Mason’s down and I’m trying to get it over his glove, and I was pretty excited that turned out to be the case.”

Mason, who had 29 saves, said he should have made the save.

Flyers defenseman Braydon Coburn was in the penalty box for tripping Tanguay at the time.

“What do you want me to say?” Flyers coach Craig Berube said. “It’s not a good penalty. I thought we played a pretty good game. We’re playing pretty good hockey. We’re finding ways to lose games. I thought we had the better of the play.”

Claude Giroux’s power-play goal at 10:00 of the third had given the Flyers a 3-2 lead. Mark Streit left the puck for Giroux, who used his speed to weave into the Avalanche end. Giroux skated between defensemen Jan Hejda and Erik Johnsonbefore moving in alone on goalie Semyon Varlamov.

“Giroux showed why he’s one of the top goal-scorers in the League,” Avalanche coach Patrick Roy said. “Against a team like this, you can’t take bad penalties, and we took a couple bad ones tonight.”

The Flyers tied the game 2-2 at 2:52 of the third on a goal by Vincent Lecavalier. Coburn passed to Lecavalier at the right point for a one-timer that beat Varlamov, who was screened by Pierre-Edouard Bellemare. Lecavalier has scored four of his six goals this season in the past five games.

“It’s disappointing because we’re six minutes from grabbing two points,” said Flyers right wing Jakub Voracek, who scored a first-period power-play goal at 10:14. “Just a couple of mistakes and it cost us the game. I don’t know how it looked from upstairs, but we were the better team.”

Defenseman Nate Guenin and rookie right wing Borna Rendulic each scored his first goal of the season 3:30 apart in the second period to give the Avalanche a 2-1 lead.

Guenin tied the game 1-1 at 10:47 when he took a shot just inside the blue line near the left-wing boards that made its way through several bodies and past Mason. Guenin’s previous goal came Feb. 28 against the Arizona Coyotes. He has four goals in 131 NHL games.

The goal was the first for the Avalanche in 111:53. Colorado hadn’t scored since Saturday against the Chicago Blackhawks when Johnson put the Avalanche ahead 2-1 at 8:53 of the first period in an eventual 5-2 loss.

The Flyers were in an 0-for-15 slump on power plays covering six games before Voracek scored in the first period. Voracek, who leads the NHL in scoring with 47 points, didn’t have a point in his previous two games, his longest stretch without one this season.

Philly defenseman Michael Del Zotto sustained a cut on his neck in a collision with Colorado’s Daniel Briere on his first shift at 1:30 of the first period. Del Zotto was cut by Briere’s skate and missed the rest of the period.