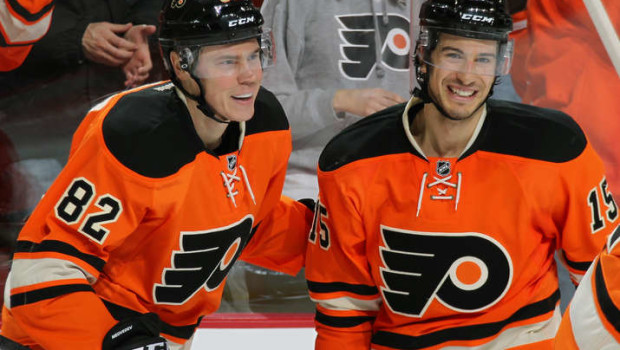 There’s something about playing the New York Islanders that gets Flyers forward Matt Read jacked up.

Read had a goal and two assists in the Flyers’ 4-0 defeat of the Islanders at Wells Fargo Center on Saturday. The three-point game was Read’s seventh in the NHL; three are against the Islanders.

Steve Mason made 20 saves for his fourth shutout of the season. Sean Couturier and Michael Raffl each had a goal and an assist and Evgeny Medvedev (above left) scored for the Flyers (18-15-7), who won their third straight game.

The Islanders played their first game this season without defenseman Travis Hamonic, who was out because of a lower-body injury. He leads the Islanders in ice time per game at 23:47.

The points were Read’s first in three games back in the lineup after being a healthy scratch Jan. 2 against the Los Angeles Kings. Read said it was the first time at any level of hockey he could remember missing a game when he was healthy.

“Took a game off to realize where my game was and get back to playing smart and play with speed,” Read said. “Maybe that’s something I lacked the last little bit. Just focused on skating well and supporting my linemates. Last game in Minnesota [a 4-3 overtime win Thursday] and tonight, things are going our way. We’re in the offensive zone a lot and we’re getting chances.”

Read had 24 goals as a rookie in 2011-12 and 22 goals in 2013-14, but last season he slumped to eight goals in 80 games while playing through a high-ankle sprain sustained in November 2014. He has six goals in 39 games this season but said now that he’s healthy his skating is improved and he’s playing more aggressive offensively.

“All season I’ve been feeling good,” Read said. “Every game I feel like I’m skating well. From being healthy, just kind of concentrating on getting back into skating and creating ice with my feet rather than use my brain to try to find ice. I’ve just got to create it for myself.”

He had an assist on Raffl’s goal to open the scoring 1:27 into the second period, and then started the cycle play at the top of the Islanders’ zone that led to Medvedev’s goal at 8:33 of the second. Read dropped a pass to the defenseman who was given a clear path to the net along the right side. His low wrist shot went between Halak’s pads for his third goal of the season.

Read’s goal at 10:58 of the third made it 3-0 and also showed how much his skating has improved. Mark Streit jumped on an Islanders turnover at their blue line and found Read entering the offensive zone with speed. He split the defense and sent a wrist shot that squeezed between Halak’s pads.

Couturier finished the scoring when he tipped Radko Gudas’ shot from the right circle past Halak at 15:14.

The goal was Couturier’s ninth of the season and sixth in the past 10 games.

“I think I’m mentally a little more confident with the puck, trying to make some plays, trying to create some plays when there’s maybe not much,” Couturier said. “It’s been working out pretty well. I’ve just got to keep being the player I am. I’m always going to be a 200-foot guy where I’m solid defensively. But when I have the chance to go on offense I have to jump on it and that’s what I’ve been doing.”

Offense is something that wasn’t there for the Islanders until the third period. After they had two shots on goal in the first period and 10 through two periods, coach Jack Capuano switched his lines, putting Frans Nielsen between Anders Leeand Josh Bailey, and John Tavares between Nikolay Kulemin and Kyle Okposo. The result was 10 shots in the third period but not much in the way of grade-A scoring chances.

It was the Islanders’ second straight defeat; they lost 4-1 to the Washington Capitals on Thursday, and they’ve scored two goals or fewer in four of their past five games.

“It’s just unacceptable about some of the ways certain guys are playing right now,” Capuano said. “We got some guys that got to find their game. We can’t go consecutive games without having any offense. It is the new NHL; it is the way it is going to be. For whatever reason right now we aren’t scoring any goals here. Going through a bit of a drought right now.”

Capuano said he and general manager Garth Snow would discuss potential roster changes before their next game Tuesday against the Columbus Blue Jackets.

“I think the top guys that are here are playing pretty good hockey to be honest with you, the experienced guys,” Capuano said. “It is some of the other guys that need to find their game. That is a decision that Garth will have to make as far as personnel. But we are going to have to sit down and talk about it going into Columbus as far as what we are going to do. Obviously it is not working with some of the guys we have now.”

The Islanders game was the first of 10 in a row against Eastern Conference teams, which continues Wednesday against the Boston Bruins.

“Today was a huge win, huge two points that we take away from them and we get,” Couturier said. “Standings are pretty tight and we need to get some wins every night.”