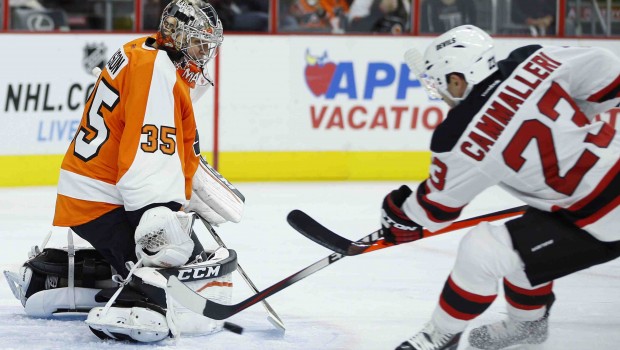 FLYERS BLANK DEVILS, GIROUX MAY BE BACK BEFORE OPENER

Steve Mason (photo above) and Rob Zepp combined for a shutout and the Flyers had three power-play goals in the first period in a 4-0 exhibition victory over the New Jersey Devils on Thursday night at the Wells Fargo Center.

Mason made eight saves in the first period and a half and Zepp stopped the final 16 shots.

Brayden Schenn and Vincent Lecavalier and rookie Shayne Gostisbehere scored with the man advantage in the first period for Philadelphia (2-1-1). Scott Laughton added a goal in the second.

But the big news in Flyerland yesterday was the sighting of Claude Giroux.

Already down top-four defenseman Kimmo Timonen, the Flyers lost Giroux for at least two weeks of the preseason with a lower-body injury suffered 15 minutes into the first day of practice. Things are looking up on the Giroux front, however.

Though it’s only been a week, Giroux resumed light skating with the team on Thursday. He took part in about 20 minutes of practice, but just did some skating and shooting without participating in any actual drills, according to reports from the Flyers’ practice facility.

Even with light skating, getting Giroux back on the ice ahead of schedule is a good sign. Additionally, the Flyers captain was adamant about his being ready for the season opener against the Boston Bruins on Oct. 8, and may return for a preseason game or two.

The Flyers may want to preach patience with their eager captain even though he would like to play in the preseason. As nice as it would be for Giroux to get himself up to game speed before the games go live, there’s a lot more value in getting back to full strength and not risk aggravating an injury in a game that doesn’t count.

The most recent developments are at least encouraging, however, as Giroux will once again be looked to for huge production once again in 2014-15.

The team’s captain is coming off of one of the best seasons of his career. He had 86 points in 82 games and matched his career-best with 28 goals en route to being a finalist for the Hart Trophy.