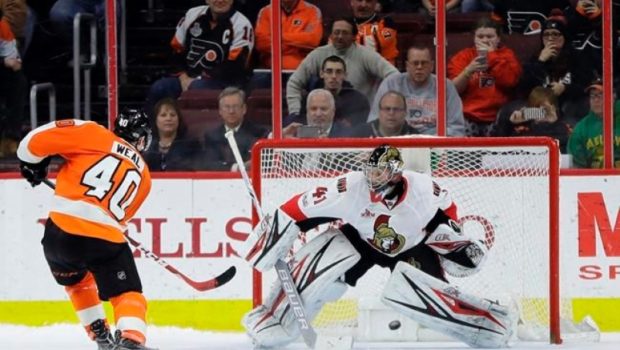 Jordan Weal scored the only shootout goal after tying the game late in the third period, sending the Flyers to a 3-2 victory over the Senators last night at the Wells.

Brayden Schenn also scored for the Flyers, a long shot to make the playoffs with six games remaining they began the day six points out of a postseason spot but needing to jump four teams.

Kyle Turris had a goal and an assist, and Erik Karlsson also scored for Ottawa.

Weal opened the shootout by beating Craig Anderson between his legs.

“We have some video on the bench that shows us what the goalie likes to do,” Weal said. “You don’t complicate it too much. You just see if the goalie likes to stay out, backs in, does anything crazy. After that, you just have to stick to your move and do it to the best of your ability.”

Weal quickly has gained the confidence of Flyers coach Dave Hakstol since being called up from Lehigh Valley of the AHL on Jan. 25.

“He’s been a good two-way player,” Hakstol said. “He’s scored some big goals for us. He’s a reliable player that generates and creates offensively.”

Weal’s goal in regulation was all about hard work — and some help from Anderson.

Weal tied it with 5:59 left in the third period after Anderson, who had been stellar to that point, misfired a pass from behind the net right onto the stick of Weal. He sent it into the empty net for his sixth of the season and fifth in the last 11 games.

Senators coach Guy Boucher challenged the play, arguing that Philly’s Wayne Simmonds interfered with Anderson as he tried to get back to the crease, but officials let the goal stand.

“Things like that happen because we pressure them hard and we took away their options,” Weal said.

“He has bailed us out other games,” the coach said. “It’s a sad mistake, but it happens.”

“For all the saves he’s made this year and all of the times he’s made us win a game — he gave us a point tonight, too,” Boucher added. “We got a point because he played well before that mistake. We’re all behind him and we’re going to keep getting behind him. He’s played terrific for us and he’s going to keep playing great.”

Both teams had chances in overtime. Turris hit the right post with a shot early in the extra session, and Michael Del Zotto and Weal each had a near miss.

Turris put Ottawa ahead 2-1 with 7:25 remaining in the third period after excellent work by Cody Ceci to set him up. Ceci deked past fallen Flyers defenders Brandon Manning and Del Zotto to the right of Philadelphia’s net before passing back to Turris in the slot. Turris’ one-timer got past Mason for his 26th goal of the season.

Karlsson opened the scoring on a power-play goal with 3:35 left in the first period, firing a wrist shot over Mason’s glove with Mark Stone providing a screen in front.

Schenn responded just more than two minutes later with a power-play goal of his own, deflecting Shayne Gostisbehere’s slap shot from the point for his 23rd of the season and 16th on the man advantage. The goal snapped an 0-for-16 drought on the power play.

In spite of the defeat, Boucher was glad to pick up another point on the road. The Senators are 21-14-1 away from home.

“You could look at it two ways, either we lost a point or we gained one,” Boucher said. “And I’d rather look at it like we’re on the road and we gained a point again.”