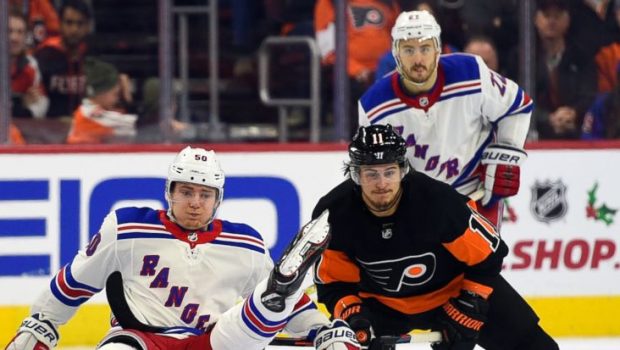 It was a little early in the season to say any game was “must win,” but the Flyers sure played like it.

Sean Couturier scored a pair of goals, Calvin Pickard made 31 saves in his and Flyers beat the New York Rangers 4-0 to stop a four-game losing streak.

Travis Konecny (above) had a goal, two assists and got into fight, Jordan Weal scored an empty-net goal and Claude Giroux had three assists for Philly, which entered tied for last in the Metropolitan conference. The Flyers scored three goals in the final five minutes, 21 seconds.

“There weren’t many guys below the bar; there were none, to be honest with you,” coach Dave Hakstol said. “We played a real good 60-minute game. Everybody went out and did their job, from the goaltender on out.”

Pickard was in net because starter Brian Elliott and backup Michal Neuvirth are sidelined with lower body injuries. Pickard has made 10 appearances and has a 4-1-2 record.

“It was great for everybody,” Pickard said. “After the last few games, we really keyed in on this one and we wanted to have a good effort start to finish. I thought we did that.”

New York, which entered tied for the Metropolitan lead, lost for just the third time in 12 games. The Rangers entered with three wins a row.

Pickard made his best save with 5:56 left, a pad stop on Lias Andersson to preserve a one-goal lead.

“I wanted to stay patient,” Pickard said. “He’s a pretty skilled guy, so you had to figure he was going to make a move. I just stayed with him and battled after that.”

Couturier scored 35 seconds later with a wrist shot from the slot, sending the puck under Henrik Lundqvist’s right arm after a pass from Konecny. After Weal’s goal, Couturier scored on a rebound with 1:37 remaining.

The Flyers had a season-high 46 shots against the 36-year-old Lundqvist, who started for the 18th time in 23 games.

The four-time All-Star said there was no doubt the Flyers deserved the victory.

“Today we played a team that did most things better than us; they played really well,” Lundqvist said. “The only thing I didn’t like is we kept taking chances when it was a one-goal game.”

After giving up the first goal in each game during their skid, the Flyers outshot the Rangers 15-8 in the first period, going ahead on Konecny’s unusual goal with 6:39 left. He sent the puck toward the net from the side boards, looking for Couturier, and the puck deflected off Lundqvist, Rangers defenseman Brady Skjei and a post before crossing the goal line.

Ryan Strome, in his fifth game with the Rangers after his acquisition from Edmonton, fought Konecny to a draw in the second period. Konecny responded to Strome’s strong check on Couturier.

“That’s the team spirit we need, battling for each other,” he said.