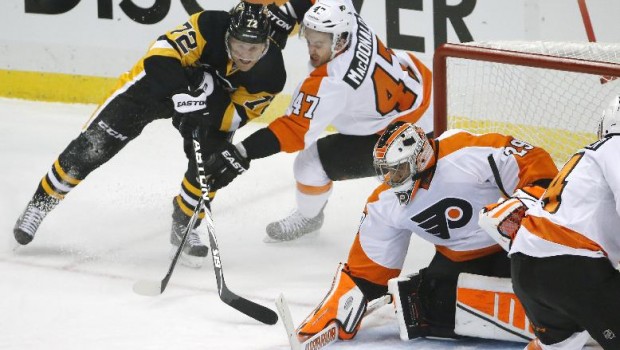 FLYERS BEAT PENS 5-3 IN THEIR HOME AWAY FROM HOME

Why don’t the Flyers arrange to play all their home games in Pittsburgh’s Consol Center, where their record in the past two years has 10-1-1, 12-2-1 counting the playoffs.?

Three third-period goals propelled the Flyers to a 5-3 win against the Pittsburgh Penguins at Consol Energy Center on Wednesday.

Less than a minute after it was ruled a shot from Pittsburgh forward Evgeni Malkin never crossed the Flyers’ goal line, Flyers forward R.J. Umberger broke a 2-2 tie with his first goal of the season 6:50 into the third period. Giroux found Umberger streaking to the net, which allowed him to redirect Giroux’s pass past Marc-Andre Fleury’s blocker.

Philly’s Matt Read extended the lead to 4-2, 2:00 later when he received a pass from Sean Couturier, deked to his right and back to his left before lifting a backhand over Fleury.

“It’s a big moment for our team,” Umberger said. “The way we responded after the last game (a 4-0 loss at the Chicago Blackhawks on Tuesday). Obviously, nothing was good about that game. So for us to come in tonight and beat a good team on their ice, finish up a road trip, a lot of courage there.”

Pittsburgh’s Marcel Goc took a pass from Nick Spaling with 2:57 remaining and put a shot behind diving goalie Ray Emery (photo above) to pull the Penguins within 4-3. Couturier scored an empty-net goal with 26.1 seconds remaining.

Pierre-Edouard Bellemare, a 29-year-old Flyers forward, scored in the first period for his first NHL goal in his sixth game.

“It was pretty unbelievable,” Bellemare said. “Especially, we won the game tonight. That helped to make it feel even better about it … I think [my family in France is] pretty much in front of the TV right now. I don’t think I have to wake them up.”

The Flyers controlled the second period, outshooting Pittsburgh 17-6, but allowed the only goal. Penguins forward Pascal Dupuis scored at 9:00 to send the game into the third period tied 2-2.

Pittsburgh defenseman Paul Martin slapped a shot into the Philly crease with Dupuis and Malkin screening Emery. The puck seemed to deflect off a Flyers defenseman and then Dupuis, causing Emery to lose track of it, then slid past Emery’s right pad for Dupuis’ second goal of the season, his first since being taken off on a stretcher during the Penguins’ 3-2 loss to the Dallas Stars on Oct. 16.

Fleury was bombarded by shots throughout the period, leading to him sprawling in his crease several times. One instance led to him lying on his back, losing his stick and moving from the left post to right to make a glove save to keep the Penguins down one goal.

Fleury faced a similar flurry a few minutes later when Wayne Simmonds hit him in the chest with a snap shot that made him fall backward before Bellemare whiffed on a shot with Fleury on his back 5:34 into the second period.

“Our second period wasn’t good,” Penguins captain Sidney Crosby said. “We still found a way to get ourselves back in the game, but we didn’t set ourselves up for the third. It wasn’t quite the way we wanted to play, but still, it’s a tied game going into the third and we have a bad third period.

“We’re playing a team playing in back-to-back games and playing at home, we should take advantage of that opportunity.”

Pittsburgh coach Mike Johnston said he thought Philadelphia started to take control of the game during the second period.

“I thought we tried to make some dangerous plays in the neutral zone,” Johnston said. “They turned over the puck and counterpunched against us. I really thought in the second period, that’s when the momentum turned in their favor. Also, I thought when we entered the offensive zone, we maybe tried to make the extra pass before we took a shot and our shot total started to go down.

“Those types of things, those shot totals, they create momentum.”

Fleury finished with 28 saves; Emery made 22.

Much like Philly dominated the second period, Pittsburgh had the better play throughout the first, which was evident when Spaling scored the first goal at 3:50.

Shortly after a penalty to Flyers forward Chris VandeVelde expired, Spaling received a pass from Christian Ehrhoff by fighting off Couturier just outside the crease and put a wrist shot past Emery’s blocker to score his first goal with the Penguins.