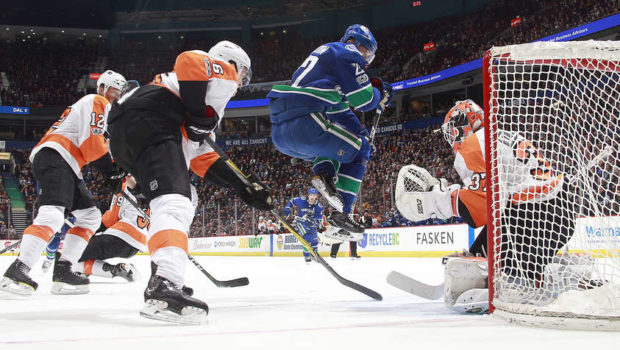 SO HOW DID THE UP-AND-DOWN FLYERS BEAT THE NHL’S BEST TEAM? EVEN THEY DON’T KNOW!

So, the up-and-down Flyers knocked off the NHL’s best team, the Tampa Bay Lightning 5-3 last night.

How did that make you feel?

“That’s kind of how a lot of our season has gone, play one good game and one that we’re not really in the game like (Thursday) night,” said Valtteri Filppula, who added an empty-net goal to secure the win. “If we play like this we’re gonna have a good chance to win against a lot of teams.”

“It’s a big win,” goalie Brian Elliott added. “It’s a measuring stick for us and we know we can compete with any team. We just gotta do it consistently on a nightly basis.”

How could the Flyers play so badly one night and then put together solid efforts against the Columbus Blue Jackets and Lightning?

“Every team’s good in this league,” said Sean Couturier who had a goal and two assists, his third three-point game of the season. “You can’t take anyone lightly. It’s two tough losses against Buffalo and Florida but we came back with good efforts in Columbus and Tampa on back-to-back nights. It shows the character of our team, but we gotta be ready. We gotta take it one game at a time and be ready for next game.”

“We’ve got a couple bad losses and that cannot continue if we want to get to where we need to be,” coach Dave Hakstol said. “(Friday) is a good step. That’s all that we can control is today and how our performance was today. We have to take that and move forward. We have a real important home stand coming up.”