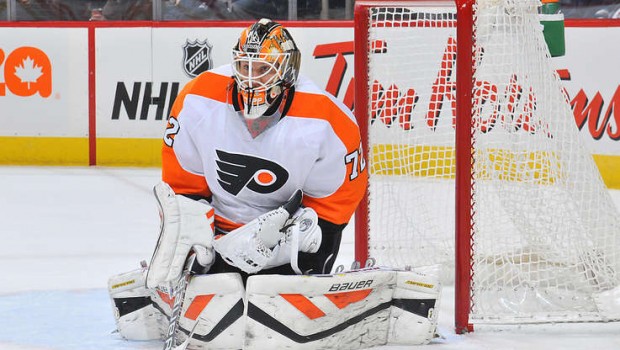 Maybe the Flyers are onto something.

They started a 33-year-old goalie who was making his NHL debut.

Vinny Lecavalier was not a healthy scratch and he scored two third period goals Sunday night as the Flyers beat the Winnipeg Jets 4-3 in overtime on Jake Voracek’s goal.

Two third-period goals from Lecavalier helped the Flyers to overcome a 3-1 third-period deficit and force overtime. After Lecavalier’s second goal with 3:14 left in regulation made it 3-3, Voracek stripped Winnipeg defenseman Dustin Byfuglien of the puck near the Winnipeg net and scored his second goal of the game 10 seconds into overtime for the Flyers, who have won back-to-back games.

Zepp became the oldest goaltender to win his NHL debut sinceHugh Lehman in 1926. Zepp finished with 25 saves for the Flyers (13-14-6), who are on an eight-game road trip.

“I think that’s awesome,” Zepp said of matching Lehman. “Why not? That’s great.”

A healthy scratch for seven games from Dec. 2-16, Lecavalier had not scored in his past 15 games before his two-goal performance. Two goals in Lecavalier’s first 18 games this season had limited him to a fourth-line role.

The Flyers controlled the third period and had limited the Jets to one shot in the period when Lecavalier scored his second goal of the game. Lecavalier intercepted Winnipeg defenseman Jay Harrison’s clearing attempt and put a shot under the crossbar for his fourth goal of the season.

“It’s always nice to get one just for the confidence,” Lecavalier said. “It seems that the next shift you go out there and you feel better, you see, your vision is kind of better.”

With Steve Mason out because of an upper-body injury, Flyers coach Craig Berube gave the 33-year-old Zepp his NHL debut. Zepp spent the past six seasons with Eisbaeren Berlin of the Deutsche Eishockey Liga before he signed with Philly last summer. He played 17 games this season with the Lehigh Valley Phantoms of the American Hockey League before the Flyers recalled him Friday.

“It has been kind of a whirlwind the past 48 hours,” Zepp said. “The way the guys battled in the third period was unbelievable. I said to them that I appreciate this more than anybody knows.”

Voracek and Flyers captain Claude Giroux combined for two goals and six assists in a 7-4 win against the Toronto Maple Leafs on Saturday, and they went to work early against Winnipeg. Voracek finished a 2-on-1 rush 46 seconds into the game, taking a pass from Giroux and sweeping it past Pavelec for his 13th goal.

Zepp faced eight shots in the first four minutes, but Halischuk made it 1-1 on the Jets’ ninth shot. Halischuk scored his first goal since March 31 when he slipped past two Philadelphia defenders and beat Zepp with a slap shot at 6:38.

Down 3-1 late in the second period, Zepp managed to stop Scheifele at the edge of the crease. The save sent the Flyers back to their dressing room still in the game.

“It’s a huge save,” Berube said. “No doubt about it. He made some big saves tonight.”

With a chance to remain in the game at 3-1, Giroux said the Flyers regrouped during the second intermission.

“We came into the [dressing] room and just told ourselves to relax,” Giroux said. “We were really frustrated on the bench.”

“I think we skated very well in the third period,” Voracek said. “We were on them, we were moving the puck very well.”

Before this season, Zepp had not played in North America since the 2004-05 season. A fourth-round pick of the Carolina Hurricanes in the 2001 NHL Draft, Zepp spent four seasons between the AHL and ECHL before going to Europe to continue his career.

“I’ve really been reflecting on the journey ever since I got called up,” Zepp said. “There are so many different things along the way that kind of have to come together for this to happen. There were obviously some doubts along the way, but I always believed in my ability, and I was fortunate to get an opportunity here with the Flyers.

“Guys like [former NHL goaltender] Tim Thomas and Viktor Fasth [of the Edmonton Oilers] coming over in their early thirties just paved the way for guys like me. It kind of gave me inspiration and hope that something could happen.”

Getting a win for Zepp was another boost for the Philadelphia dressing room, according to Giroux.

“It’s great for us,” Giroux said. “I feel like we’re kind of getting tighter as a team and playing more as a team. Like I’ve said before, our chemistry off of the ice is one of the best that I have seen, and we just have to find a way to do it on the ice, and that’s what we did.

“[Zepp] has worked so hard to be here. His work ethic is unbelievable. There is nobody that deserves it more than him. We’re really happy for him, and we really wanted to get that win for him.”

Winnipeg was missing four regular defensemen because of long-term injuries, but coach Paul Maurice saw more behind the third-period breakdown.