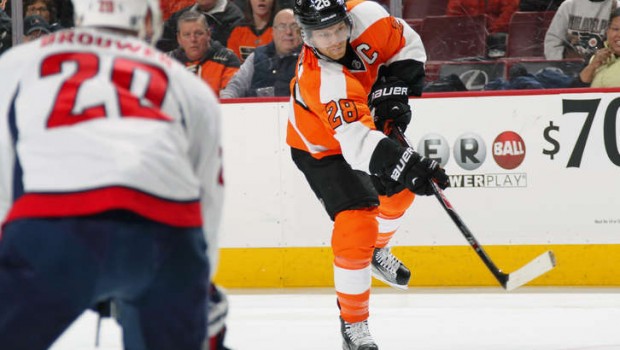 What a difference five weeks make!

On Jan. 17, the Flyers were 13 points out of the final spot for the Stanley Cup Playoffs.

Michael Del Zotto scored with 4:13 remaining to lift the Flyers to a 3-2 win Sunday against the Washington Capitals, briefly pulling Philly within two points of the Boston Bruins for the Eastern Conference’s second and final wild-card spot.

Jakub Voracek had two assists to set a new career high with 63 points, Claude Giroux (photo above) and Wayne Simmonds each scored for the Flyers, and Rob Zepp, making his second start in as many days, made 21 saves.

The Flyers swept their weekend back-to-back at Wells Fargo Center, including a 3-2 shootout win against the Nashville Predators on Saturday, and continued to cut the gap on the Bruins in the race for the East’s second wild-card spot, a comeback few thought was possible.

“In my mind I was almost writing them off, too,” Flyers chairman Ed Snider said.

The Bruins defeated the Chicago Blackhawks 6-2 later Sunday to move four points ahead of the Flyers.

Del Zotto’s goal broke a 2-2 tie, but it was their penalty killing that sealed the victory. The Flyers killed off all five Capitals power plays, none bigger than one over the final 57.2 seconds after Nick Schultz was called for delay of game for shooting the puck over the glass.

The Capitals’ best chance came early in the man-advantage when Alex Ovechkin, the NHL’s leading goal-scorer, was set up for a one-timer on the left side. But Flyers defenseman Braydon Coburn stepped into the line of fire and blocked the shot.

For his bravery Coburn was awarded the hat given to the Flyers’ player of the game. The two points provided all the pain-killers he needed to remedy any soreness in his ankle from where Ovechkin’s shot hit him.

“Penalty killing has been good for a long time,” Flyers coach Craig Berube said. “I think we’re getting up ice and pressuring, disrupting breakouts and doing little things like that. … I think that when you kill penalties it really gives you momentum. It’s been huge.”

Ovechkin and Backstrom, who entered the day as the League’s leading scorer, were held off the scoresheet for the 14th time all season and the second time in 25 games. The previous time it happened was Jan. 14 against the Flyers.

The Capitals had chances, but coach Barry Trotz said the failure of the power play to take advantage was the difference in the game.

“We didn’t enter [the offensive zone] very well,” Trotz said. “We were not really sharp in terms of execution. Just on the entries you watch how many times you pass into guys’ skates. Just that little hesitation where you have to go find that puck in the skates and get it up to you. They can close and jump on you when you’re not as good at executing your plays. I thought we were not real sharp on our passing at the entries. Therefore, if you don’t get into the zone you’re not going to score.”

While the Capitals failed to take advantage of their chances, the Flyers succeeded. Late in the third period, at the end of a shift, Voracek found himself with the puck in the Washington zone as the Flyers were changing players behind him. Del Zotto jumped off the bench and joined the play, and Voracek found him with a hard cross-ice pass.

“When you turn up usually, that’s where I look first, across the ice, because that’s usually where no one’s at, that big pocket,” Voracek said. “[Del Zotto] is a great skater. When he beats the forward up the ice he’s getting lot of chances. I’m going … when I turned up and I saw him, there was a pretty big pocket there. That was a hard pass but it was a great finish.”

Del Zotto’s goal came after the Capitals had rallied from a 2-0 deficit early in the second.

Wilson finished a cross-ice feed from John Carlson to get Washington on the board at 5:23 of the second, then Ward knocked a bouncing puck off the Flyers’ Zac Rinaldo and past Zepp to the short side, over his blocker, at 15:22 of the period.

The Capitals had the momentum at that point but the Flyers were able to keep them from getting the go-ahead goal, in part because of three successful penalty kills in the final 21 minutes of the game.

“We had chances to go up by one late in the game and just missed, so we had chances,” Ward said. “… We just couldn’t capitalize at the end. They got up by a couple, but we came back. We had life but they just scored a late goal.”

Giroux’s power-play goal at 4:39 of the first ended an 11-game drought and gave Philly an early lead, and then Simmonds’ power-play goal at 1:34 of the second, his 24th of the season, made it 2-0. The goal extended Simmonds’ career-best point streak to eight games; he has six goals and three assists in that span.

Had the Capitals’ push-back come earlier in the season the Flyers aren’t sure they could have squeezed out a victory. But their confidence in the last month has continued to build.

“We stay patient and find a way to work it out and get that next goal or the tying goal or at least get a point out of the game,” Voracek said. “That’s what’s going to make the difference in the end.”