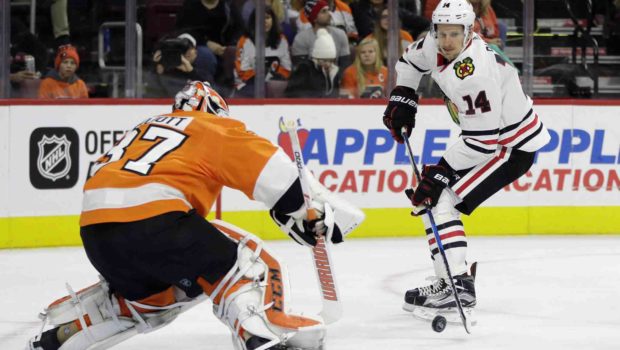 The Flyers had just allowed Connor Murphy, a defenseman not known for his offense, to score the Hawks’ first goal of the night to cut into a three-goal lead in the second period.

But it ended without a goal celebration, and the offensive renaissance coach Joel Quenneville sought in mixing up his lines never appeared in a 3-1 loss to the Flyers.

The Hawks now have lost 14 straight regular-season games in Philly dating to Nov. 9, 1996.

Once again, goals didn’t come for the Hawks, who put 39 shots on Flyers goaltender Brian Elliott. But a slow start negated the strong effort the Hawks had in the third period. And the early deficit they faced — 3-0 with 3:51 gone in the second period — was too much to overcome.

Looking for anything resembling offense, Quenneville put Patrick Sharp, Patrick Kane and Toews together on the top line to start the game, but it didn’t take long for Quenneville to shake things up again. The Flyers’ top line skated circles around the Hawks in the first two periods and accounted for all three Flyers goals.

First it was Claude Giroux 4:58 into the game with a wicked one-timer from the left circle. Then Jakub Voracek, on another one-timer at 12:08.

In the second period Quenneville plugged the line blender back in. Out went the lines the Hawks practiced with the last three days, but the Flyers’ top line once again killed the Hawks in transition, this time with Sean Couturier getting inside position on Duncan Keith and taking a feed from Giroux to beat goalie Corey Crawford at 3:51. The Hawks looked stuck on the ice.

“It just comes down to lulls in the game,” winger Brandon Saad said. “We have chances, and then when things aren’t going in, sometimes we go the other way and give up too many chances, quit playing the right way.”

The Flyers were beating them up and down the ice with their speed, and offense evaded the Hawks until Murphy followed his own rebound for a goal at 16:13 of the second period.

With the 5-on-3 power play happening soon after, the Hawks seem poised to get back into the game.

There hasn’t been enough of that lately for the Hawks, and if it keeps up, this scoring drought might be more than just a hiccup in a long season.