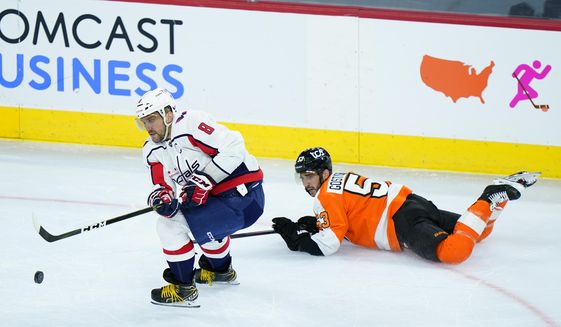 FLYERS ARE SLIGHT FAVE TO STOP THEIR BLEEDING TONIGHT VS. CAPS!

The Flyers will try to stop their bleeding — a fourth loss in five games — against the Washington Capitals tonight at the Wells.

The Flyers fell 5-3 to the Capitals on Thursday, their second loss to them in the past week.

This recent losing skid has dropped the Flyers out of a playoff spot, at least temporarily.

“There’s no doubt we have to be better,” Flyers head coach Alain Vigneault said. “That’s on me to have them prepared and know what to expect. We need to do a better job next game and players have to get themselves ready to execute and compete.”

Seven costly turnovers in the first period put the Flyers in a 2-1 hole and they never recovered. After a strong start this season, they’re suddenly vying for points to work their way back into the playoff race.

“We all know in the locker room what we need to do as a team and individually better,” said Travis Konecny, who had one goal and one assist in the loss. “We need to focus on winning games and not on anybody else.”

One player who could provide assistance on defense is Phil Myers. He was a surprising healthy scratch on Thursday and the absence was noticeable.

“There are things we’ve talked about with him too often,” Vigneault said of Myers. “One, being first on the puck, taking a hit to make a play. He needs to improve in that area. It’s cost us in the last few games in some situations. Next time he comes in the lineup, he’s got to find a way to play the right way and stay in the lineup.”

The surging Capitals will be searching for their fourth straight win.

Alex Ovechkin scored his 715th career goal and came within two goals of tying Phil Esposito for sixth all-time on the career goals list on Thursday. Ovechkin has been stellar against the Flyers through his career with 38 goals in 60 games.

“I certainly know it’s important for a season like this to string some good games together and get some really good points down the stretch,” Carlson said. “Those are always nice. It can really make up for a little dry spell here or there, but certainly this year with the shortened season, it’s great. With that said, everything’s so close, so the onus is on us to keep moving and keep collecting as many as we can.”

As the wins pile up, especially on the road against a heated rival, the team will continue to gain confidence.

“I think fighting and clawing for ways to win is good, building some character,” Carlson said. “Obviously we would like to win 10-0 every night, but being in different situations and coming out on top is I think nice, to do it in certain ways so you can kind of put it in your back pocket and draw on it when you need it.”

The Capitals also received a major boost from goaltender Ilya Samsonov, who made 30 saves and added an assist on Nic Dowd’s empty net goal. He’s 3-0-0 since returning from a bout with COVID-19.

“It’s really hard recovery after COVID,” Samsonov said. “I have a problem with the breathing, so hard. You got some 40 minutes practice, you feel so tired and hard breathing. But right now, I feel more and more better every day.”