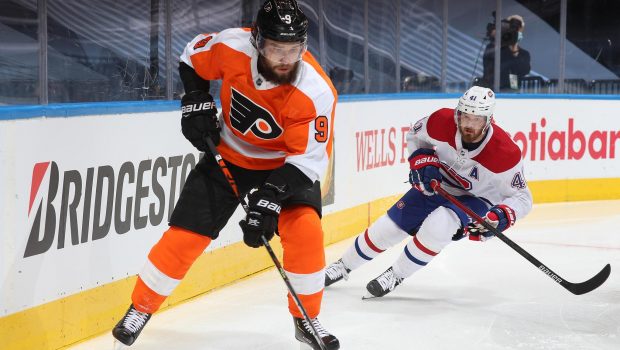 FLYERS ARE -145 FAVES TO PUT HABS OUT OF THEIR MISERY TONIGHT!

The Canadiens offense has no answers for Flyers goalie Carter Hart.

So, tonight’s game 5 should be the Habs’ last in this bubble tournament.

After scoring five goals in a rout of the Flyers in Game 2, Montreal has come up empty-handed in Games 3 and 4 to fall into a 3-1 series hole

The Flyers opened as modest -123 favorites but the oddsmakers quickly adjusted, moving the line into the -135 to -145 range depending on the book. The total has held steady at 5.

The Canadiens weren’t exactly the 1980s Edmonton Oilers during the regular season, but with five of their six goals in the series coming in that one-sided Game 2 win, it’s clear that the Flyers have Montreal completely flummoxed on the offensive end. Montreal has generated just 52 shots in the past two games while squandering five man-advantage opportunities.

Things might seem dire, but there’s reason for hope with the Habs and it starts at the back end. Montreal has held Philly to just six goals in the series and has limited the Flyers to a paltry 42 shots over the last two games. Still, the Canadiens could use better luck in the faceoff dot, where they were dominated (36-19) in that Game 4 loss.

The Flyers wouldn’t immediately name a starting goaltender for tonight’s Game 5, with the teams having just played Game 4 a day earlier. At this point, it might not matter: Carter Hart (1.51 GAA, .949 SV% in the postseason) was sensational in those back-to-back shutout wins over Montreal, while backup Brian Elliott (1.47 GAA, .913 SV%) has also proven capable.

That said, not all is perfect in Philly, with the Flyers having scored just one power-play goal in 17 chances in the series. That makes them 1-for-28 in the postseason, a truly hideous success rate by any measure. With no opportunity to practice their sagging PP between Games 4 and 5, you can expect more futility against a remarkably stout Canadiens penalty-kill unit.

There’s little to suggest that either team is due for an offensive breakout. With both sides playing terrific shutdown hockey, look for the Flyers and Canadiens to double down on the defense and keep their low-scoring trend alive. One thought on “FLYERS ARE -145 FAVES TO PUT HABS OUT OF THEIR MISERY TONIGHT!”