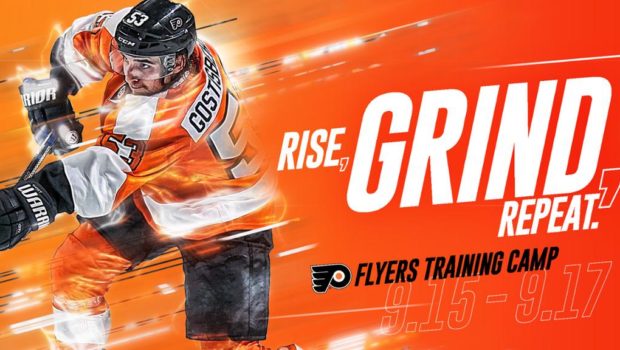 The Flyers will have announced their 2017 training camp schedule with a graphic that is as misleading as it is embarrassing:

Sounds like a motto of an Alabama chain gang instead of a hockey team that has been mired in mediocrity since making the 2010 Stanley Cup playoffs on a fluke!

They’ll open camp next Friday, September 15 with on-ice sessions at the Skate Zone in Voorhees.

The Flyers will open their exhibition slate on Sunday, Sept. 17 with a game against the New York Islanders at Nassau Coliseum. Group 1 will skate that day from 10:15 to noon and Group 2 will skate from 11:45 to 1:30. The first two days’ ice times will then be in effect on September 18 and 19 leading into the team’s split squad games on September 20 vs. the Islanders, on which morning ice times are still to be determined.

Prior to main camp, the Flyers will hold a Rookie Camp on Sept. 11, 12 and 13 ahead of their Rookie Game vs. the Islanders at the Wells Fargo Center on Sept. 13. Practices are scheduled for 10 AM both days (subject to change).The morning skate time on Sept. 13 is to be determined.

All on-ice sessions at Virtua Center Flyers Skate Zone are free and open to the public. Updated on-ice schedules at Voorhees past the first weekend of camp can be found at PhiladelphiaFlyers.com or on the official Flyers Twitter account. All scheduled ice times at Voorhees are subject to change without notice.

The Flyers will be staging a variety of fan-friendly attractions on Saturday, September 16 in conjunction with the on-ice sessions. Games and activities will be set up outside Skate Zone, and Flyers radio color analyst Steve Coates will host a Q&A with to-be-determined players at 12:30 Saturday afternoon. There will also be fan giveaways to those in attendance over the course of the weekend.