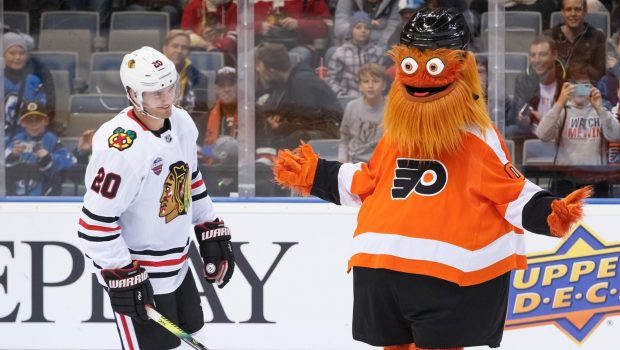 The Flyers open their 2019-20 season this afternoon in Prague against the Chicago Blackhawks, and their superstar mascot Gritty is the talk of the town.

Along with native son Jakub Voracek, who resides nearby.

The Flyers and Hawks entertained thousands of fans with a skills competition yesterday at O2 Arena.

After practice, Voracek signed a jersey and teammates Claude Giroux and Carter Hart donated autographed gear that will be auctioned to raise money for the foundation. The NHL also made a $25,000 donation to the foundation.

“It means a lot, obviously, you know, it’s those kinds of moments, and sports especially, that brings people together,” Voracek said. “That’s why we started a foundation. That’s why we are doing that. I’m glad they get the chance. And with NHL help, we made it happen. So, it’s always a lot of fun to see your family around.”

The atmosphere, different from an off-day practice in North America, struck a chord with several players.

“It was awesome, and [the reaction for] Jake at the end, it shows how much they love hockey over here, how excited they are that they get to see a live NHL game, a live NHL practice,” Flyers defenseman Justin Braun said. “The excitement is there. Really cool to be part of it.”