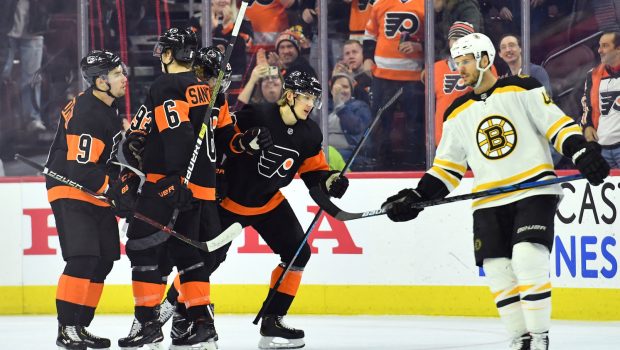 FLYERS AND BRUINS ARE EVEN TONIGHT, SO BET THE 5 1/2 OVER!

The Flyers and Bruins opened at identical odds:

The total is set at 5.5, with the OVER and UNDER identical in most spots.

The Bruins might have seen their lead atop the Atlantic – and the overall standings – take a hit with a 5-3 setback to Tampa Bay last time out, but they received a huge favor from the last-place Detroit Red Wings, who stunned the Lightning 5-4 in a shootout the following night. Boston is now anywhere from -850 to -1250 in most spots to win the division title.

But while the Bruins don’t have much left to play for, they’ll still be keen on sharpening things up heading into what they hope will be a lengthy Stanley Cup playoff run. And they have the kind of schedule that will allow them to do just that, with six of their next nine games coming against the bottom six teams in the NHL standings.

It’s impressive enough that the Flyers come into the new week with virtually the same record as the Capitals – but they’ve left little doubt over the length of their winning streak, with eight of their victories coming by multiple goals. And while the Bruins have been the class of the NHL to date, they’ve lost their last three visits to Philadelphia.

But while the Flyers have two impressive winning streaks on the line – they’ve also won four straight meetings with the Bruins – they shouldn’t expect things to be as smooth Tuesday night as they’ve been over the course of their hot stretch. Each of the past four games between the teams has been decided by a goal, with the last three going to extra time.

This one’s a toss-up in just about every sense – so we’ll roll with the hotter team and the home-ice.