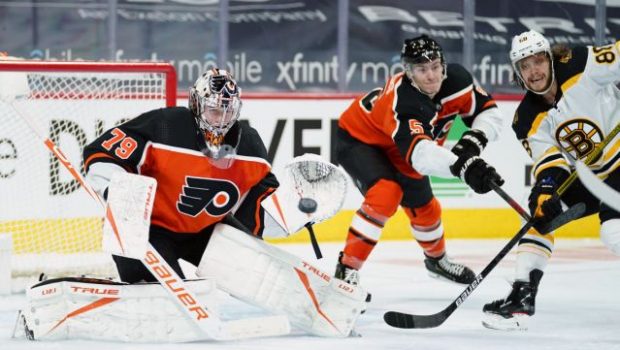 FLYERS AND BRUINS ARE BEST IN THE EAST: REMATCH FRIDAY NIGHT!

After winning four straight at home, the Bruins have taken points out of the first three games (2-0-1) of a four-game road trip that concludes Friday night with a rematch in Philly.

Pastrnak, who tied for the league lead in goals (48) last season, provided a 1-0 lead in the opening seconds of the first period. In the third, he then cut the Flyer lead to 3-2 with a power-play strike at 12:05, and then rattled home the equalizer at 19:45 when a Bergeron attempt squibbed toward the left post for Pastrnak to bat out of mid-air past Flyers goalie Carter Hart (now 0-2-1 vs. the B’s this season).

“He’s on a mission. He’s a scorer, right?” Cassidy said of Pastrnak. “You need those guys to win hockey games for you. He’s done it the last few nights, clearly looks energized and ready to play. We’re thankful for it, and grateful.”

Cassidy kidded about his sage advice to Pastrnak heading into his return to the lineup. He cautioned him that it could take some time to recover his timing and scoring touch. It is often the case for skilled scorers.

“He showed me!” said Cassidy.

The Flyers began to pull away early in the third period, Jakub Voracek breaking a 1-1 tie with his easy pot at the right post after a slick dish by defenseman Travis Sanheim at 1:03.

The deficit grew to two goals with only 11:19 to go in the third when ex-BU winger Joel Farabee finished off with a bomb from the right circle after the Flyers broke out on a 2-on-1 break vs. Jakub Zboril. Farabee, who had a hat trick in the Flyers’ previous game, connected for his sixth of the season.

Much like their two games in Washington, the Bruins came out with throttle open wide, consistently pinning the Flyers in their end in the first 20 minutes.