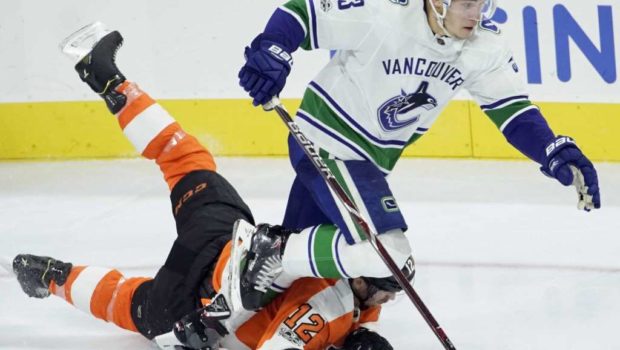 His second goal of the game came on a wrist shot on the power play at 1:56 of the second period to give the Canucks a 3-1 lead.

Sven Baertschi and Loui Eriksson scored, and Henrik Sedin had two assists for the Canucks (10-8-3), who opened a six-game road trip after losing two straight.

Michal Neuvirth was pulled after allowing four goals on 22 shots in his first appearance since Nov. 4 for the Flyers (8-9-4), who have lost five straight (0-3-2). Brian Elliott replaced him and made 13 saves.

Ivan Provorov and Jakub Voracek scored for the Flyers, who led 1-0 on Provorov’s fourth goal at 8:00 of the first period before allowing four straight goals.

“I don’t think we’re playing bad hockey,” Flyers forward Sean Couturier said after the Flyers went 1-for-3 on the penalty kill. “It’s just little details that are costing us games right now. I think the PK needs to be better.”

Daniel Sedin scored his fourth goal on a breakaway at 9:42 of the first period to tie it 1-1. It was not ruled a goal on the ice, but the call was overturned on video review.

Boeser then gave the Canucks a 2-1 lead 19 seconds later when he got behind the Flyers during a defensemen change and scored from the right face-off circle at 10:01.

Boeser’s big game came against Flyers coach Dave Hakstol, who recruited Boeser to the University of North Dakota before leaving for Philly in 2015.

“He might not be happy about it,” Boeser said. “But we have a pretty good relationship. I’m really happy for him getting the [Philadelphia] job. He’s a great guy.”

Baertschi poked in a loose puck in front of the net with one second left on the power play at 14:40 of the second period for his eighth goal and a 4-1 lead.

Hakstol said he should have pulled Neuvirth one goal earlier.

“Once it gets to four, it’s tough to get out of that hole,” Hakstol said. “Our guys tied in the third period, but I think the change after three (goals) maybe would’ve been the spark our team needed.”

Voracek’s sixth goal at 9:56 of the third period made it 4-2, and the Canucks withstood a late Flyers push before Eriksson scored his first into an empty net at 19:39 for the 5-2 final.