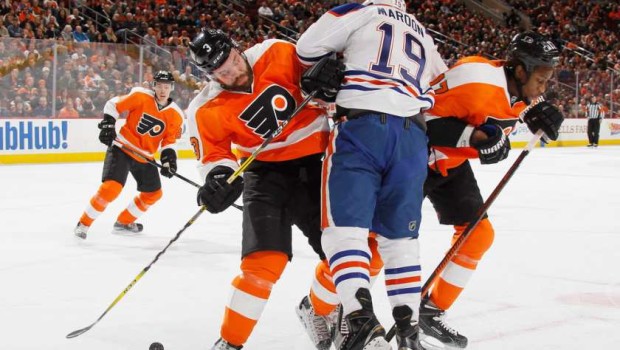 If the Flyers fail to make the playoffs next month, last night’s disastrous defeat to the hopeless Edmonton Oilers will be seen as the beginning of the end.

Taylor Hall, Nail Yakupov, Patrick Maroon and Lauri Korpikoski all scored, and Cam Talbot made 35 saves to lead Edmonton to its third straight victory, 4-0 over the Flyers at the Wells.

Top rookie Connor McDavid had an assist in his first game versus the Flyers since being injured against them in Philly’s 4-2 win at Edmonton on Nov. 3. The 2015 No. 1 overall pick missed 37 games after breaking his clavicle when he was ridden hard into the boards by the Flyers’ Brandon Manning, who watched from the press box as a healthy scratch.

The loss to the Western Conference’s worst team was a blow to the Flyers’ playoff chances. The Flyers entered play three points behind Pittsburgh, which beat the New York Rangers on Thursday night, for the Eastern Conference’s final playoff spot.

They had won their previous three games on a six-game home stand that continues Saturday against Columbus. Philly was shut out for the fourth time this season, including three at home.

”We couldn’t buy a break around the net and they capitalized on the opportunities that they had,” coach Dave Hakstol said. ”That’s the difference in the game.”

McDavid showed off his speed when he blew past defenseman Evgeny Medvedevto set up Edmonton’s opening goal with 8:40 left in the first period. McDavid got in alone on goal and Yakupov poked home the rebound after Michal Neuvirth made the initial stop on McDavid.

”He gets faster when he gets the puck,” Hall said of McDavid. ”That’s a quality that not many guys in the world have. It’s fun to watch.”

McDavid, the NHL’s rookie of the month for February, has 20 points in his last 16 games.

Edmonton took advantage of a miscommunication between Flyers defensemen Shayne Gostisbehere and Andrew MacDonald at the Flyers’ blue line. Hall pounced on the puck and got ahead of Gostisbehere, eventually beating Neuvirth on a breakaway to give Edmonton a two-goal lead with 5:38 left in the period. It was Hall’s team-leading 21st goal.

”A little bit of a mixup on their part and as an offensive player you love seeing the puck squeak out,” Hall said. ”If I can get breakaways like that every game, it’s a fun game to play.”

And the Oilers went up 3-0 a little under 2 minutes later when Maroon notched his fifth goal of the season in his debut with Edmonton after being traded earlier this week from Anaheim for Martin Gernat and a fourth-round draft pick.

The Flyers had lots of chances in the period but couldn’t convert despite outshooting Edmonton 16-9. The Flyers’ best opportunity may have been with 9 1/2 minutes left in the period when Sean Couturier fired at a wide-open net, only to have the puck deflect off Korpikoski before Talbot pounced on the puck just as it was about to cross the blue line.

Four minutes earlier, Mark Streit’s slap shot on a power play caromed off the post. Medvedev hit the post later in the period, following Ghostisbere’s first-period blast from the point that also ricocheted off the post.

Neuvirth made his fifth straight start in front of healthy No. 1 goalie Steve Mason and had 27 saves.