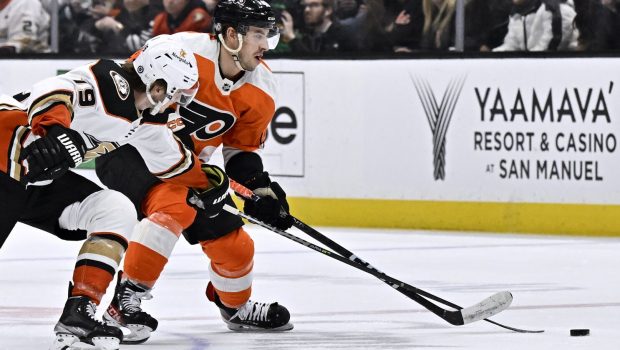 FLYERS 3-0 IN CALI: MAYBE THEY SHOULD PLAY ALL THEIR GAMES THERE!

Travis Konecny and Joel Farabee both had a goal and an assist and the Flyers beat the Anaheim Ducks 4-1.

Morgan Frost and Scott Laughton also scored, and Noah Cates and Kevin Hayes each had two assists to help the Flyers finish 3-2-0 on a five-game trip — with all three victories coming in California.

Samuel Ersson stopped 28 shots to improve to 3-0-0 in three career starts since taking over for the injured Carter Hart (concussion) last week. Ersson lost his chance at his first career shutout with 39.6 seconds remaining but helped give the Flyers their first three-game winning streak since the opening three games of the season.

“He looks so calm in there. It looks like he’s been playing here for a while. He’s doing a great job and he works hard too in practice so it’s nice to see it paying off for him.”