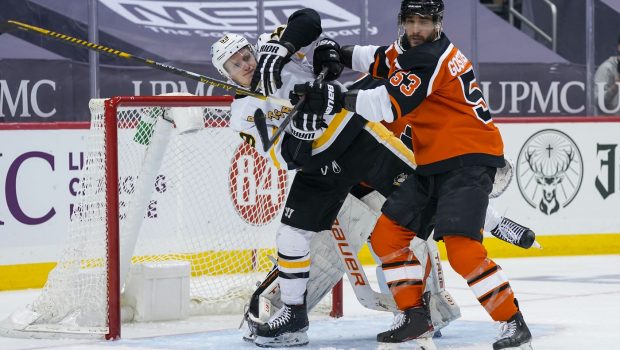 FLYERS 1ST SHOOTOUT WIN OVER PENS EVER TOO LITTLE, TOO LATE!

Claude Giroux and Sean Couturier scored in the shootout and the Flyers defeated the Pittsburgh Penguins 2-1.

The Flyers are still six points behind the Boston Bruins, who have two game sin hand, for the East’s last playoff spot with 13 games to play.

Jakub Voracek scored his eighth of the season in regulation for the Flyers, who snapped a two-game skid. The Flyers won for just the ninth time in their past 25 games. Hart stopped 31 shots for his first win in eight starts. He allowed five goals on 27 shots the previous time he faced Pittsburgh.

Crosby scored his 17th of the season for Pittsburgh, which had its three-game win streak end. Tristan Jarry made 26 saves for the Penguins.

Voracek tied the game 1-1 at 1:24 of the third period when he put a wrist shot between Jarry’s pads from between the circles.

Crosby opened the scoring at 5:04 of the second period. During the play, Crosby gave his stick to defenseman Brian Dumoulin in the defensive zone, grabbed a bench stick from an equipment manager off the rush and converted a rebound that was misplayed in front by Hart.