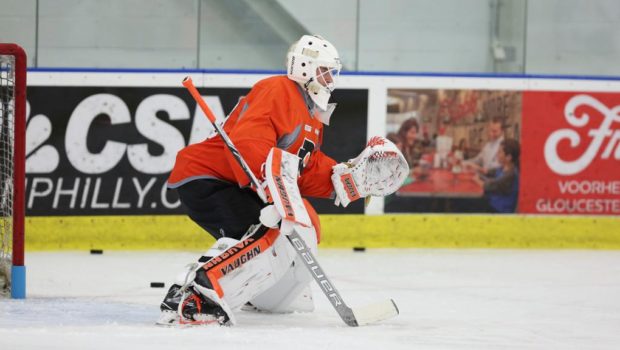 FLYERS’ 19-YEAR-OLD CARTER HART MAY BE GOALIE OF THE FUTURE!

Nineteen-year-old Carter Hart doesn’t have much of a chance to make the Flyers out of training camp in September.

After all, with veteran goalies Brian Elliott and Michal Neuvirth are ahead of him and Lehigh Valley Phantoms goaltenders Anthony Stolarz and Alex Lyon are in the wings:

A more likely scenario is that Hart returns to his junior team, the Everett Silvertips, for one additional year of seasoning before playing pro hockey.

“I took away so much from playing in the World Juniors last year,” Hart said. “It’s always special to represent your country. The tempo of play in the tournament is very high, because these are the best players in the world your age. It’s higher tempo than a typical junior game.“

“Obviously, if I could have scripted it differently, we would have won. But anything can happen in a shootout. That was a great game and the [Canada vs. USA] rivalry is pretty special. I don’t know how things will work out for next season but if I am in a situation where I can be in Buffalo [the host site for the 2018 tournament]. I would love to do that and try to win a gold medal. I’ve heard there’s going to be an outdoor game between USA and Canada. That will be incredible,” Hart said.

“Anytime you can get that caliber of coaching, there are things you can learn and apply,” Hart said. “We focused here on post-to-post work, and there are some things in guarding the post that I plan to work into my game.”