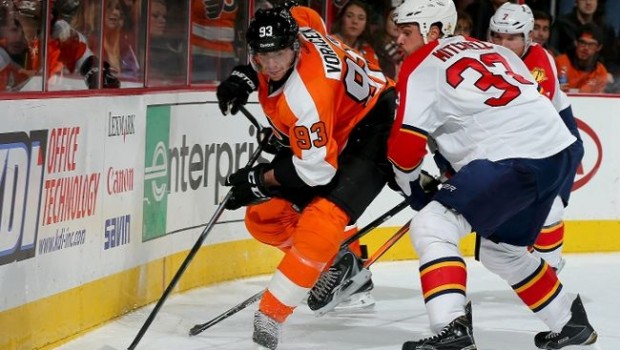 FLYER VORACEK, WHO HASN’T SCORED A GOAL THIS SEASON, PHILLY ATHLETE OF THE YEAR!!!???

Everywhere you look the media are under attack from Republicans running for president, ISIS and teen-age pop stars who think they can control us.

And in many respects, the public disdain for the media is warranted because many of us are out of touch, out to lunch and out of excuses for being so lazy.

So what to make of the Philadelphia Sports Writers Association naming the Flyers’ Jake Voracek as the city’s outstanding pro athlete of the year?

He hasn’t scored a goal in 12 games of this Flyers season!

Voracek will be among many other honored athletes Feb. 1 for the 112th annual PSWA dinner held at the Crowne Plaza in Cherry Hill.
“To be picked out of the four main sports in Philadelphia, it’s a tremendous honor,” said Voracek.

“There’s so many good athletes in the city. When I came over four years ago, I would never have thought I would accomplish something like this. I couldn’t do it without my teammates; they deserve credit.”

Voracek has become a Flyers fixture since arriving in 2011. Last season, he led the team in points (82) and assists (59), playing in all 82 regular season games. His assist total was second in the league and his point total was fourth. The right winger added to his impressive year by collecting the Bobby Clarke Trophy for the second time in three seasons, and he was selected for his first NHL All-Star Game.