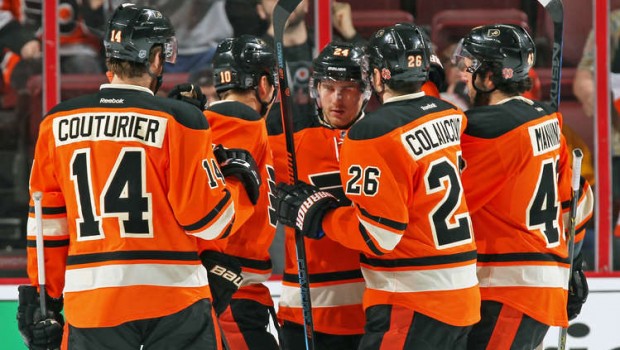 Matt Read (center in photo above) celebrates his goal.

The Flyers and the Ottawa Senators were like two ships passing in the afternoon:

Needing just one point for the playoffs in the season finale, the Senators wrapped up their sizzling second-half rally with a 3-1 win over the Flyers on Saturday and clinched a spot in the Eastern Conference playoffs.

”Here we are at the end of the year, we made an unbelievable run for the past 30 games,” Senators captain Erik Karlsson said.

Headed toward a spot in the NHL draft lottery two months ago, the Senators finished 23-4-4 over their final 31 games. They will face Montreal in the first round of the playoffs.

The Flyers finished 33-31-18 (10-20-11 on the road) and missed the playoffs for the second time in three seasons. This absence could cost coach Craig Berube his job. Berube led the Flyers to the playoffs last season when he took over with the team off to an 0-3 start.

Berube was elevated from an assistant to the head job by former general manager Paul Holmgren. Ron Hextall, in his first season calling the shots, could go in a different direction with the Flyers set to have a top-10 draft lottery pick and a potential rebuild ahead.

Berube said he never thought the finale could be his final game on the bench.

”We’ve got some real good franchise players on his hockey team,” Berube said. ”The components are here.”

Jakub Voracek and team captain Claude Giroux both were in the mix most of the season for the league scoring title and Wayne Simmonds led the team in goals despite missing the final two weeks with a foot injury.

Simmonds hobbled on crutches and posed with fans in the press box during intermission, getting a bird’s eye view of a team that never lived up to so much playoff potential.

”We’ve got to come with a good attitude next year at camp,” Giroux said.

The Flyers have missed the playoffs two times in a three-season span for the first time since they missed it five straight seasons from 1989-1994.

The Senators hope they can play deep into the postseason behind goalie Andrew Hammond. Nicknamed the ”Hamburglar,” Hammond went from a borderline AHL goalie to posting a 20-1-2 record since he was recalled in the second half.

”I’ve never had a stretch of hockey like this in my life,” Hammond said. ”It’s something I don’t think anyone can really explain.”

He stopped 34 shots and made sure the Senators would not need help from other teams to make the playoffs.

The 27-year-old Hammond entered with a 1.76 goals-against average since his recall from the AHL. Not bad for an undrafted rookie.

Ottawa fans have tossed hamburgers on the ice and the owner of six McDonald’s locations in the Ottawa Valley arranged for Hammond to have a card that gives him free McDonald’s food for life.

The Senators, who were 14 points out of a playoff spot on Feb. 10, mobbed Hammond at the net when the final horn sounded.

”I don’t know if it’s completely sunk in yet,” Hammond said, ”but tomorrow when we wake up, we’ll be in the playoffs. That’s a really special feeling for this group from where we were.”

Stone also has fueled Ottawa’s surge, finishing the season with a nine-game points streak. He scored an empty-netter in the first period when goalie Steve Mason was wildly out of position off a misplayed shot.

Stone made it 3-1 in the third with his 26th goal of the season.

Pageau snapped a 1-1 tie in the second with his 10th goal and third in three games.