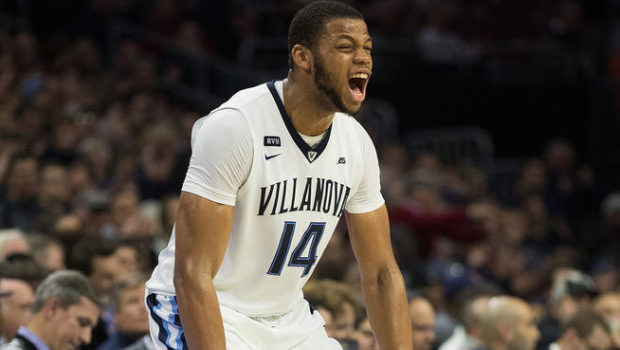 The Wildcats (22-1, 9-1 Big East) won their ninth straight game in front of a Wells Fargo Center crowd dotted with green jerseys and chanting for the Eagles hours before the Super Bowl.

“I love the Eagles,” Villanova coach Jay Wright said, “but this is way more important to me.”

Mikal Bridges, who scored 17 points, hit a 3 with 2:22 left for a 21-point lead that seemed to serve as the cue for fans to turn their full attention toward the Super Bowl. They put on dog masks (an Eagles rallying symbol) and chanted “We Want Brady!”

Villanova’s Eric Paschall slammed into the court with such a thump it could be heard way up high and subbed out for a quick breather on the bench. Paschall’s timeout was brief. He hit a 3 that tied the game at 48-all.

Jalen Brunson, a top candidate for national player of the year, followed with another 3 that snapped a tie game and served as the offensive flare that Nova was set for its usual decisive run.

It was that time.

Paschall dunked on the next possession and Bridges came flying out of nowhere down the baseline to put back a missed shot that sent the roaring crowd to their feet in appreciation.

Khadeen Carrington, who averages 14.2 points, was whistled for his fourth foul just 6 1/2 minutes into the half and Bridges blocked a shot that sent the ball soaring over Seton Hall’s bench.

Myles Powell steadied the Pirates with a pair of 3s that kept pulled them to 62-60. Spellman hit a 3 and Bridges nailed a three-point play to help the Wildcats start to pull away. Powell hit one more 3 that gave Seton Hall a feint glimmer of hope but that’s about all teams get these days against Nova.

“You’ve got to almost play perfect when you play Villanova on the road,” Seton Hall coach Kevin Willard said.

Seton Hall was one underdog Philly had no interest in rooting for an upset.

The “Good Luck, Philadelphia Eagles!” sign flashed on the big screen as fans belted out “Fly, Eagles, Fly!” at the Wells Fargo Center.

Seton Hall and Butler have been the only losses in Villanova’s Big East record since the conference was reconfigured in 2013. Each team had defeated Villanova three times — or, six of the program’s 12 losses over that span.

Spellman hit three 3s in the first half and scored 15 points to give the Wildcats a 41-37 lead at the break. He has brushed aside the sting of sitting out last season because of eligibility issues,

“It was just hard for me because I wanted to help my teammates win,” Spellman said. “I just really wanted to be there on game day. I was there for them, just not in the same way.”

Spellman has a smooth stroke from the perimeter for a 6-foot-8, 240-pound forward, the kind of frame usually reserved for banging under the boards, not sinking 3s like Steph Curry.

“I’ve never had somebody as complete as that with size and strength,” Wright said.