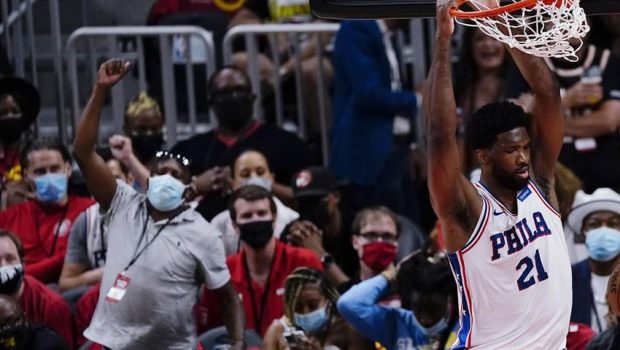 FLUSHED! HOW SIXERS DESTROYED HAWKS AND TRAE YOUNG IN GAME 3

That flushing sound you may have heard last night coming from Atlanta was the Sixers destroying the Hawks in game 3 of their Eastern semi series.

Because the national media darling Hawks and Trae Young were beaten so badly that even ESPN’s broadcast team could hype the Hawks no more.

Joel Embiid, Ben Simmons and Seth Curry scored Philly’s first 24 points after halftime and outscored the Hawks 29-19 in the third, building a 20-point cushion by quarter’s end. The 76ers’ 127-111 victory returns homecourt advantage to the East’s No. 1 seed entering Monday’s Game 4 in Atlanta.

After scoring 79 points in the first two games of the series, Embiid again led the Sixers with 27 points, nine rebounds and eight assists. Tobias Harris added 22 points, Simmons 18 and Curry 12. Starting 76ers wing Danny Green suffered a right calf strain minutes into the game, but the bench scored 48 points in his absence, led by 12 points and six rebounds from Dwight Howard and 14 points for Furkan Korkmaz.

Simmons and Matisse Thybulle again prevented Hawks star Trae Young from dominating as he did in Game 1. Young still managed 28 points on 9-for-17 shooting and eight assists, but a swarming defense prevented much of the action Young’s probing generates for Atlanta’s potent offense.

Eleven straight points from Korkmaz, including two 3-pointers and three free throws on another attempt, gave the Sixers a 24-16 cushion late in the first quarter, and the Hawks came within a possession again. Atlanta did trim the Sixers lead to five on a driving layup by Young just before the break, but the Sixers came out fully prepared to bury an underdog Atlanta team that won Game 1 and hung around in Game 2.

John Collins added 23 points and seven rebounds for the Hawks. Bogdan Bogdanovic scored 19 points. Danilo Gallinari generated 17 points off the bench, but Philly’s reserves outscored Atlanta’s, 48-32. Kevin Huerter’s three points were a disappointment for a Hawks second unit that had been their advantage.

The two teams will tip again in what is a crucial game for the Hawks on Monday at 7:30 p.m. ET on TNT.

One thought on “FLUSHED! HOW SIXERS DESTROYED HAWKS AND TRAE YOUNG IN GAME 3”