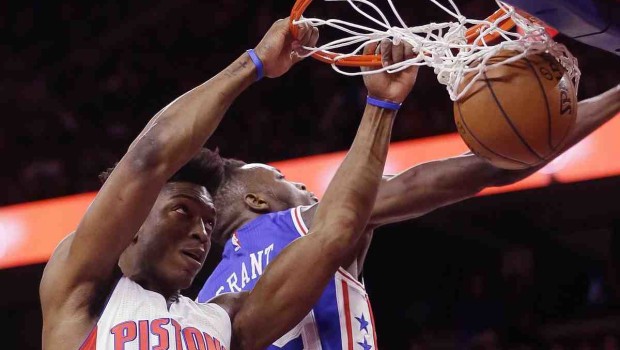 FLU AND PISTONS TOO MUCH FOR SIXERS IN 110-97 LOSS

Jeremi Grant, who led the Sixers with 21 points, got posterized by Stanley Johnson’s dunk.

Without Okafor and JaKarr Sampson, who both missed their second game in two nights with the flu, the Sixers didn’t have the legs to keep up with the Pistons down the stretch and took a 110-97 loss.

When Andre Drummond got rolling, 76ers coach Brett Brown did the same thing almost every NBA coach does.

He started fouling the Detroit Pistons center, hoping to chase the worst free-throw shooter in league history off the floor.

It usually works, as Drummond came into the game shooting 26.9 percent from the line in his last 13 games, including a barely believable 1 for 14 in the last two.

Wednesday was the rare exception. Drummond had his best night from the line since October, going 7 for 12 .

”Dre’s an All-Star in this league and we all know it,” said Reggie Jackson, who scored 27 points. ”He hasn’t had the best last two games, but he put a lot of work into it and it was great to see him knock down those free throws. He had his energy back tonight and he played like a great player again.”

Jeremi Grant scored 21 points for the Sixers, while Nerlens Noel had 20.

”I’ve been playing against Andre since I was 15, so I know what you have to do to stop him,” Noel said. ”He’s a great player, and I know that he can wear a lot of guys out with his strength and athletic ability, but he’s one of the guys that I’ve always worked on being able to match.”

”We did a great job of gutting out most of that game,” Brown said. ”I think our young guys learned a lot about the NBA tonight, because they had to step up and make a huge effort when they were hurting physically and mentally.”

Philadelphia led 79-74 going into the fourth, but Johnson’s floater tied it at 86 with 7:31 to play. Johnson scored again on Detroit’s next possession, and Jackson’s 3-pointer put the Pistons up 91-90.

Detroit was within 45-44 at the half, but couldn’t stop Noel early in the third. A very rare three-point play by Drummond helped Detroit stay in the game, but Isaiah Canaan topped him with a four-point play late in the period.

Noel and Grant outscored the Pistons 14-12 in the first quarter as Philadelphia built an eight-point lead. Even with the Sixers on the second half of a back-to-back, it was Detroit that came out without any energy – something Van Gundy has complained about all year.

”I thought we played three quarters of a game on both ends of the floor,” he said. ”We didn’t play offense in the first quarter and we didn’t play defense in the third. If we could ever play consistently for 48 minutes, we’d have a chance to do some big things.”

The Sixers still led 36-26 with five minutes left in the second, but Detroit’s offense finally showed up while the Sixers stopped hitting shots. After a huge mistake when Drummond was called for goaltending on a 3-pointer, Detroit narrowed the gap when Jackson pulled up, pump-faked and banked in a buzzer-beating 3.

Both teams failed to break 40 percent from the floor in the half, but the Pistons were able to stay close despite nine turnovers by outscoring the Sixers 11-6 from the free throw line.