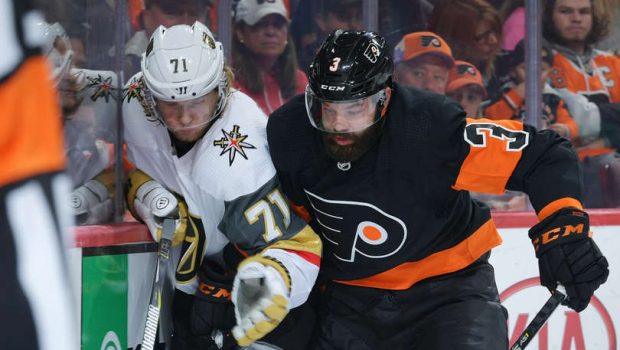 FLEURY WAS GOLDEN AS KNIGHTS TURN AWAY FLYERS 1-0!

Marc-Andre Fleury turned away breakaways, made sliding stops and used great glovework to stop 26 shots to lead the Vegas Golden Knights to a 1-0 victory over the Flyers.

Cody Eakin bailed out the Golden Knights with the winner with 1:25 left in the game. Eakin ended the scoreless tie with a sensational sequence for the goal. He made a dive for the puck to keep it away from Flyers center Sean Couturier in Philly’s end of the ice. Ryan Carpenter snared the puck and passed it back to Eakin, who fired it from the circle past Brian Elliott for the winner.

Elliott was pulled to give the Flyers the man-advantage and they still couldn’t solve Fleury. Fleury made a diving stop across the crease with 30 seconds left to deny Flyers captain Claude Giroux the tying goal.

He beat the Flyers for the 29th time, got his 406th career win and 49th NHL shutout.

The Golden Knights had had hit the skids with a 1-4 start that included an opening-night home loss to the Flyers. But on the final game of a five-game road trip, Fleury carried Vegas to a needed win before it returns home next week to open a five-game homestand.

Fleury made 10 saves in the second period and all of them were worthy of retweets. He stuffed Scott Laughton on a short-handed breakaway that wiped out the center and sent him crashing into the boards. Laughton crashed back-first into the boards and was down on the ice for a few seconds, then went straight to the locker room. He didn’t return until the third .

Moments after that save, Giroux was alone on a breakaway, took a nifty skip over a Vegas blade and was also stopped by Fleury. Fleury lay on his right side and snared the puck with his glove a tick before it reached the crease. Giroux’s stick hop was a play-of-the-day candidate — had Fleury not topped him with the save of the month. The Golden Knights tweeted the clip with the caption, “Don’t you Fleury bout a thing.”

“You know he had a couple desperate saves there,” Giroux said. “He’s a goalie that doesn’t quit on the puck.”

The Flyers were stomped 8-2 in their home opener Tuesday night against the San Jose Sharks and were booed off the ice to start a make-or-break year in coach Dave Hakstol’s fourth season. They rebounded 24 hours later with a gritty win at Ottawa and played a solid 60 minutes Saturday against the Western Conference champions. It just wasn’t enough for a team that can’t avoid any more injuries.

“This is one of those nights, tip my hat to Fleury in net, they made a play late in the hockey game and it hurts like hell to walk out of here with nothing,” Hakstol said.

Elliott rebounded from the eight-goal disaster in his last home start to stop 20 shots against Vegas.

“Both teams had a lot of chances. Goalies played well and we were able to get the last one,” Eakin said.

Laughton was banged up and forward Oskar Lindblom also hit the locker room in the third after Golden Knights defenseman Brayden McNabb plowed him into the glass. The Flyers were already without two of their top nine forwards — Nolan Patrick and James van Riemsdyk. Patrick could miss up to 10 days after he took a stick to the face against Ottawa. Van Riemsdyk, who signed a $35 million, five-year contract in the summer, is out another month because an injury suffered when was hit with a shot in the second game of the season.