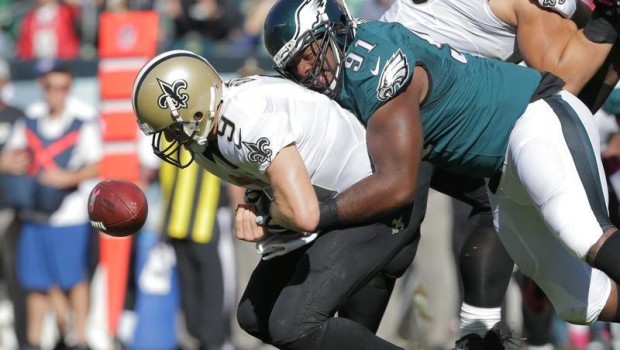 In the locker room after the Eagles’ 39-17 beatdown of the New Orleans Saints, no Bird was prouder than defensive end Fletcher Cox.

“This ball’s going home with me,” Cox said. “I’m going to give a big credit to the back-end today. All three of our sacks were coverage sacks. It was all about them having the quarterback hold onto the football and give the rush time to get there.”

Cox not only sacked future Hall of Fame quarterback Drew Brees three times, but he also forced two fumbles (above) while recovering one of them on his own.

Already one of the Eagles’ top defenders, Cox led all Eagles with six tackles, three sacks, one tackle for loss and three quarterback hurries.

The Eagles defense forced four Saints turnovers that led to 20 points converted by Sam Bradford, DeMarco Murray and the Eagles’ offense, setting the tone in a season-salvaging blowout victory.

“It’s real big to have four turnovers,” Cox said. “Three of them put our offense in a position to score … They did what they had to do and put us into the end zone.”

Known as a quarterback who has a quick release and is historically accurate, at times today the Eagle’s secondary forced Brees to hold onto the ball, hold onto the ball and hold onto it some more … A real credit to the coverage units downfield.

“I was real surprised,” Cox said. “You see tape of him and the ball’s usually out real quick. We just stayed in his face. It’s what we talked about all week and it paid off.”